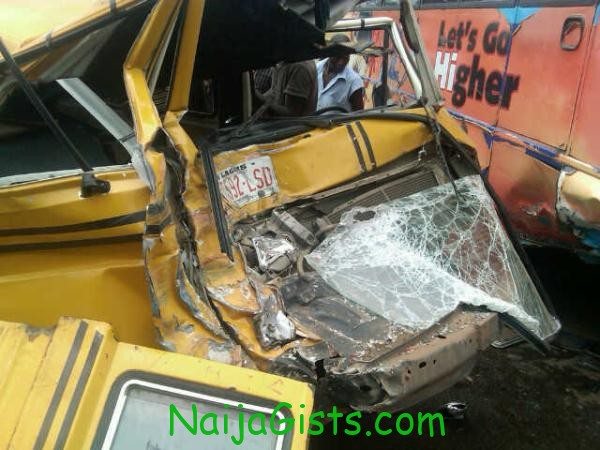 2 people were feared dead yesterday, when a commuter bus commonly called Danfo, collided with a fast-moving truck at the Berger Yard area of Mile 2 on the Oshodi-Apapa Expressway, Lagos, Southwest Nigeria.

According to pm news, the danfo bus, with number-plate YB 765 EPE, was driving against traffic when the accident occurred.

The impact of the collision forced the bus to turn 180 degrees, while the trailer sped off after the accident.

Although the front of the  bus was seriously affected, the driver and conductor sustained minor injuries.

A victim, who simply gave his name as Okechukwu, was thankful to God for escaping alive, as he watched some of the commuters lying lifeless while many had broken legs  after the crash which happened at about 4:20 p.m.

Narrating what happened, Okechukwu said he was supposed to sit in the front seat, but the woman there said he was smelling because he just came out from Westminster.

“ I then entered the back of the bus that was going to Oshodi and the driver drove against traffic. As the bus moved, the next thing I heard was ‘gbam.’ A fast-moving trailer, which was on its right lane, hit us and the force turned the bus round to face where we were coming from,” he said.

Another victim, Lola, seen on the ground with her left knee separated from other parts of her body, called on passers-by for help. Though she could not explain what really happened, she recalled that she was in the bus before the accident.

Another victim, who was identified as Mrs Orungbeja, said she was returning home and was in the bus when the driver drove against traffic, facing Oshodi.

She noted that the driver was driving into the expressway, before the trailer collided with it .

A woman whose leg was shattered was begging for help from passers. A kind-hearted commercial motorcycle rider carried her to a nearby hospital for quick attention.