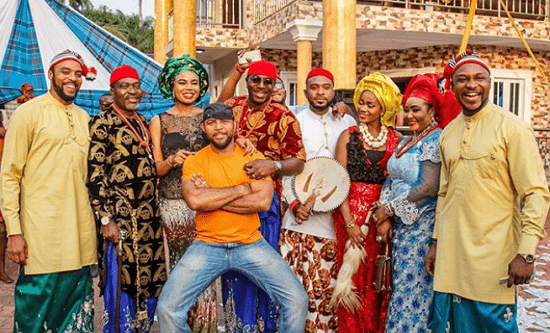 Nigerian superstar David Adeleke aka Davido has been picked to produce an album for upcoming Nollywood movie, ‘Living in Bondage: Breaking Free’.

The movie scheduled for release in cinemas across Nigeria from November 8 is a sequel to hit Nollywood movie, ‘Living in Bondage’ which was produced 27 years ago.

With the recent release of the movie poster, Davido, in a video, said he was excited to be featured in the movie.

Here is what he wrote on his IG page about his role in the upcoming movie:

“We will be in the super album coming with the movie ‘Sequel of living in bondage’ coming out in November 2019″.

“As you all know, it is one of the movies to come out in the global of Nollywood. And when Charles of Play Network approached me, and asked me to lend my voice in the album, I was excited and we are excited to be in the movie coming. I can not wait for you guys to see it.”

The artiste, who has various hit songs and collaborations with both local and international artistes, will be producing a song for the movie.

‘Living in Bondage: Breaking free’ is a production of Play Network in conjunction with Native Filmworks.

The first production, which is a two-part movie was written by Kenneth Nnebue and Okechukwu Ogunjiofor, directed by Chris Obi Rapu, and produced by Ogunjiofor. Shot straight-to-video, it starred Kenneth Okonkwo and Nnenna Nwabueze in their break-out roles.

In 2015, veteran actor Ramsey Nouah, was reported to have secured the rights to ‘Living in Bondage’ from Kenneth Nnebue for a possible remake to be filmed in Europe, America and Nigeria. Last year, Nouah announced that his remake had become a sequel titled: ‘Living in Bondage: Breaking Free’.