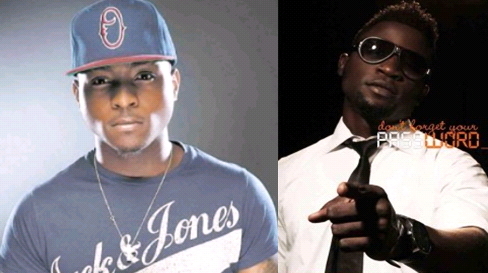 Days after the release of Davido’s new music titled Gobe, we learnt he allegedly bought the original version of the song from an upcoming Nigerian singer nick-named Password after he threatened him with a lawsuit.

Gobe was initially released by Password back in July 2011 but didn’t make a hit.

According to insiders, Password was the writer of the first version of the now popular Gobe song. He sold it to David Adeleke for close to 500 thousand naira.

“The Dude sold the song to Davido. He produced and wrote it, all of a sudden they are saying Shizzi produced it’, a studio rat and close friend to Password” said an anonymous source.

The singers are very open about this issue in their tweets.

Below is a couple of back and forth tweets between the two.

“Big ups 2 @iamshizzi and @iam_password for such a great combination of work for GOBE! Morestuff 2 come HKN!“- Davido tweeted this today

“Follow my gud friend @iam_password and thanx to him and d inspiration we all put into gobe! Cc”@iam_Davido.” – said HKN producer via Twitter this afternoon

Listen to the original version of Gobe by Password below

Below is Davido’s video version of Gobe

Another twist to the story is that singer Password is claiming that the account iam_password is fake. He still claims Davido stole his original song.

Below are few of his tweets via Twitter handle GobePassword made on Tuesday February 26.

Typical Nigeria, Nobody believes the victim

When Davido has proof that we made a deal, he should tweet at me. bloody coward

My song got stolen, simple as that, hook, beat, everything . . no shame

I know many will not believe me, Davido is the superstar, so he’s right . . i only opened this account to expose his lies, believe or not

@i_Spillz_ Please what do you mean? I am the victim here, i am just joining twitter today, because my friends told me my song was stolen

You claim we had a deal to re do my track? @iam_davido and @iam_shizzi, please where is the proof? why did you steal my song?

I produced my track Gobe myself

@iam_davido Why will you steal my song, and claim that i sold it to you? have we ever met before?

This is theft of intellectual property

I did not do any deal with @iam_davido and @iam_shizzi, My MGT will press charges!

I am the real owner of the Gobe track. 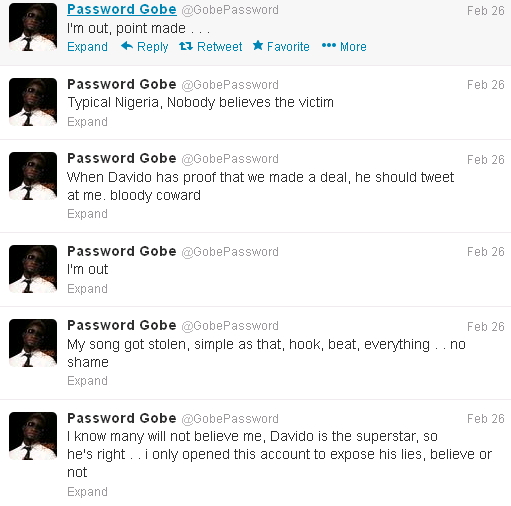