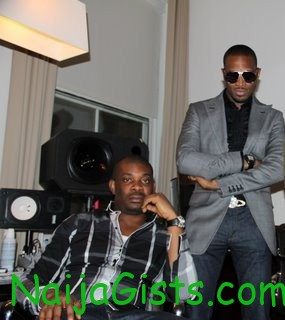 This is one of the latest gist-behind-the-gist about what actually went wrong between D’Banj and Don Jazzy over the management of Mo’Hits Records. According to City People Magazine, there were many problems between the duo, and when they started having problems making serious decisions about the future and operations of the label, the two agreed going their separate ways will be the best option.

Listed below are some of the problems according to City People:

D’Banj’s egocentric attitude, we gathered is one of the reasons the duo fell apart. According to information reaching us, D’Banj has been acting funny lately and always disregards any decision made by Don Jazzy and any other Mo Hits Crew concerning how they run the company. “D’Banj is naturally one person that is egocentric but one person he respects a lot is Don Jazzy. He has always been the face of the brand because Don Jazzy is more preoccupied with technical work but of late he doesn’t even regard Don Jazzy anymore. This is because they have been having issues. There was even a time he told Don Jazzy that without him, there will be no Mo’Hits Records.  No one can really tell what has got into him but the fact remains that he has allowed certain things to get to him which has obviously affected his relationship with Don Jazzy.

There has been a sharing formula on whatever D’Banj makes as an artiste. A certain percentage is expected to be remitted to Mo’Hits account from any show and endorsement deal any artiste on the label gets. Don Jazzy, being the producer makes no money from shows and hardly produce any other artiste, but lives on the money the artistes make from shows because he is the President of Mo Hits. The issue of money started about 4 years ago when D’banj got the Globacom Endorsement deal. D Banj is said to have refused to remit the company’s percentage and based on the fact that there is no written agreement between them Don Jazzy could not question his decision. “There are too many issues to start talking about how money got in between them. Most notable ones are the Globacom deal and Presidential election campaign deal. Remember Don Jazzy said it clear on Twitter that he never collected any money from the president. Though D’Banj has been the one financing most of their projects but it is believed that he should be remitting certain amount back to run the company.

D’Banj’s mother is one person that has been the backbone of MoHits  record from the outset. For certain reasons, sources disclosed, she got displeased with Don Jazzy and other members of Mo’Hits Record allegedly encouraging D’Banj to move on without them. D’Banj’s mother, we learnt has been the one in control of their activities lately and is not in any way pleased with what he gives back to the label having been the one making all the money.

The deal between MoHits records and G.O.O.D music owned by American Rapper, Kanye West, is one of the best things to ever happen to the Nigerian music industry. While many people celebrated the deal, little did they know it will eventually cause a rift between them. Details of what went wrong is yet to be ascertained but our source alleged that “ Don Jazzy was more favoured in the deal than D’Banj. Don Jazzy, reports say, has already produced a track for Good Music.

During the removal  of fuel subsidy protest in Lagos, Don Jazzy made a comment on Twitter disregarding the action of the president  to have increased fuel price.  He also noted that he never collected any money for the presidential campaign done by D’banj in 2011. The statement, we gathered got D’Banj very upset and caused a big rift between them.

CHOICE OF BANKULI OVER SUNDAY ARE AS MANAGER

The delay of the release of Wande Coal’s album, sources disclosed, was initiated by D’Banj. Just like he delayed the release of his first album M2M for his last album, D’banj, insiders disclosed intends not to have Wande release any album until he releases his own.  After much pressure on Don Jazzy to release Wande Coal’s album, he dropped three singles which D’Banj according to sources, was not happy about. “Wande has always been a threat to D’Banj and he believes Don Jazzy should put more energy on his own work rather than Wande or any other artiste on Mo’Hits. That Don Jazzy released three singles from Wande’s forthcoming album may have been the final straw that broke the camel’s back and that is one big reason they fell apart.(city people)

Continue Reading
You may also like...
Related Topics:dbanj mom, why dbanj and don jazzy seperate