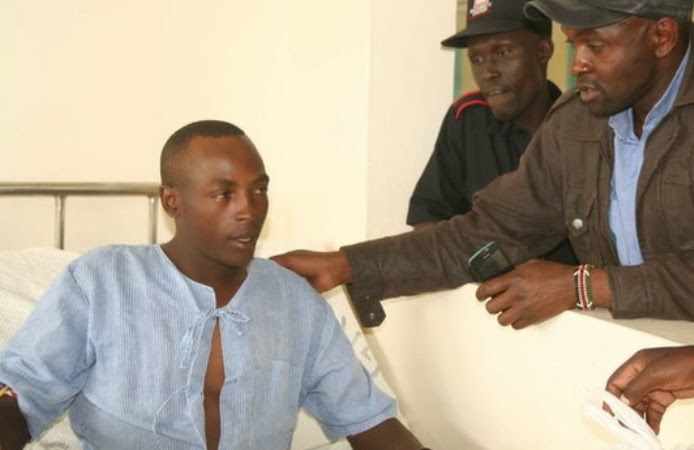 Pictured above with his father and relatives is Mr Paul Mutora, a Kenyan man who killed himself by taking insecticide on Wednesday.

His family members who found his lifeless body rushed him to the hospital. After all effort to save him proved abortive, he was declared dead at Naivasha hospital last Wednesday night.

His corpse was immediately transferred to the morgue. Paul caused a scene while he was being embalmed the next day, his body suddenly stirred and he was found breathing.

The sudden discovery forced the shocked mortuary staff to take to their heels. They allegedly left him and ran for safety.

According to Kenyan Standard newspaper, Paul Mutora’s father and family members came to the mortuary on Thursday morning to see his corpse. They later returned home for his funeral arrangements. “But in the afternoon we were informed, he was alive and were left in shock,” the father said.

Another witness said that when noises were heard inside the cold room: “The mortuary attendant and a worker took to their heels screaming.”

Paul was later moved to the male ward for proper treatment.

“The suicide was a mistake from the start and I apologise to my father,” the patient said.

What a marvelous God!