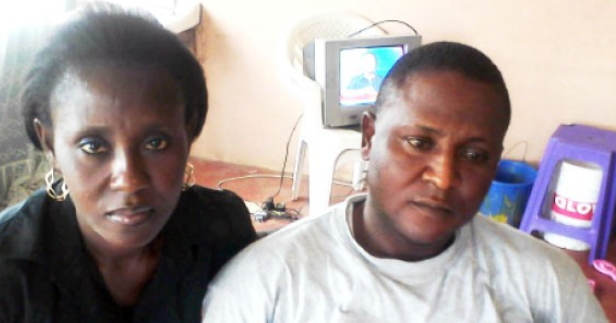 49-year-old Mr Kayode Sotunde, a retired Nigerian soldier has narrated his death experience after he woke from the dead at a mortuary in April.

The ex-military man who died en-route Kano on the 11th of April, 2013 is a living witness that heaven is real.

On the fateful day of his death, the passenger bus taking him and others to Kano from Gboko crashed on the road. All the 17 passengers on the bus died on the spot.

Sotunde who is yet to gain his health back said he woke up after 3 days at Ahmadu Bello University Hospital morgue  where his corpse and that of others were deposited for families to claim them for burial.

Mr Sotunde said his corpse was being prepared for burial when he woke up.

Journey from Gboko to mortuary

On that fateful day, that was April 11, 2013, I was travelling from Gboko to Kano to see my younger brother, Jide Sotunde,  a soldier serving in Kano. We had agreed on the journey which we had thought would afford us to discuss important issues, including the possibilities of getting another job that would not be too far from where I had my wife.

I retired from the Nigerian Army, (Supply and Transport), Apapa Lagos where I served for 30 years, during which I also participated in many peace keeping force assignments outside Nigeria.

After retirement, I got a job as a security guard at the Dangote Cement, Gboko, Benue State from where I also resigned because of the distance of my workplace and where my family was based in Osogbo.

The ill-fated vehicle was an 18-seater passenger bus, which I boarded in Gboko en-route Kano. We were barely two hours into the journey when a passenger asked us to pray. Since it was a normal thing for a passenger to offer to pray on such a long journey, I did not heed his call.  I was just playing with my mobile phone set.

Aside from that, I didn’t believe in the prayer since I didn’t know anything about Jesus Christ. I was a freethinker who neither went to church nor worshipped any idol. We were making progress on the journey when suddenly there was a bang. That was all I could recollect about the journey until I woke up three days after in the mortuary of the Ahmadu Bello University Teaching Hospital, Kano where I was told that I died in an accident and my corpse along with other 17 passengers were deposited there.

Even though the hospital authorities told me that I was in their morgue for three days as a dead man, I actually spent more days there before I could regain my senses.

I was to be buried in Kano

I was told that before I returned from the land of the dead, my family had instructed my younger brother who I was visiting in Kano before the accident to bury me in Kano since they could not afford the N150,000, which was said to have been requested by transporters to take my corpse from Kano to Abeokuta.  My elder sister, Moradeke Sotunde played a prominent role in this regard.

I was told that my corpse was taken out of the mortuary after they had dug my grave and organised some clerics to offer the funeral prayers.

They wanted to bury me  in Kano because my family members couldn’t afford N150,000 demanded for carrying my corpse to Abeokuta for burial.  The initial plan was to move my corpse back home to Abeokuta, where a grave had been dug but for the transportation cost.

My brother, truly, there is life after death. I can also tell you that there is a living God. You may not believe me, but I am a living witness to this. I may not be able to describe Heaven or Hell, but there is another life after this one that we are living.

This place I am talking about is full of snow. I may not have been to America, but I have heard about snow. Where we were was full of snow, with plenty of something that I can describe as alum stones; whitish in colour with something I can describe as granite in this physical world.  In spite of the terrible cold, there was no day that we felt cold and it was never harmful to us.

All of us were there without knowing whether we are male or female. We couldn’t see our eyes, mouth and nose. We had no leg; we had no arm, but we floated in the air without our bodies touching the ground. We were flying around what I will describe as another planet.

On the third day of my arrival on the strange planet, they gave me a message that we were expecting one big prophet.

After the message was delivered,  they nominated ushers  among us to welcome the prophet.  And seconds later, people started trooping in, jubilating as if a goal was just scored in a football match.

On that planet, there were many stars which were not stable in one place, like we have in the sky in this world. I noticed that on a daily basis, people kept on increasing, even though we don’t know from where they came.

I was in this mood until they (I don’t know them) told me that I should go back home to work for the Lord. According to them, there were many people in the world who are not only in bondage, but are also afflicted with human pains. They also instructed that I should work for the Lord and heel people. I was even arguing, putting up some resistance that I could not do it. This was the condition I found myself until I opened my eyes and saw Jide, my younger  brother in this part of the world again.

Since the Lord has directed me to work for Him, I will surely do so because ‘to be forewarned, is to be forearmed.’ It was because of this that I went to do my thanksgiving service at the Mountain of Fire and Miracle, in Lagos with the General Overseer, Pastor Olukoya.

The Lord has started performing miracles in other people’s lives through me. I don’t want to sound boastful, but God has started using me. I do pray for people now and they usually return to tell me that their problems have been solved. It is the Lord’s doing.

I have already prayed for a woman who has married been for 14 years without a child that God will give her the fruit of the womb. The person who lives in Ikorodu spoke to me through the telephone and I believe Lord will answer her prayers and request. I have accepted to work in God’s vineyard till I return to Him.

Day I returned to Abeokuta

I caused a stir in this area when I returned alive to Abeokuta because people including my family members, except my brother who was with me when I rose from the dead, did not know I had risen from the dead.

On arrival in Abeokuta, we played pranks on my people as they did not know that I was returning to home alive that day.

When we got nearer home, the person that accompanied me decided to call Kemi, my mother’s last born that we were already in Abeokuta.  When my sister saw me, she fainted and was later revived.  She was shivering when she woke up.

We later told her to return home to tell others that I had risen from the dead. On my way, I saw people mourning me, wearing black attire.

I trekked a distance of about 800 metres to my father’s house.  There, a grave had also been dug beside my late father’s before the family decided to bury my corpse in Kano. I waved as people were expressing shock and disbelief at seeing me alive. When I attempted to move closer to a woman in her shop, she ran away, thinking I was a ghost and pleading that she had no hands in my death. My sister, Moradeke who lives in Lagos was also wearing a black attire, mourning along with others until I returned home.

I returned to Abeokuta on the very day I was to be buried. I even met many of the mourners, wearing black (including my sisters) who had gathered in my father’s house here, (Sabo Abeokuta).

There was also a particular woman who threw away the beans meal she was eating and ran away from her shop when she sighted me.

I kept on saying that I was not dead, but she found it difficult to believe me.

Although I have returned from the land of the dead, I have not fully regained my health as I am talking to you. I have both chest and body pains. In fact, medically speaking, I am not alright.  I usually run strange temperature.  That was why I visited the Federal Medical Centre, Idi Aba for medical treatment.  I vomit blood each time I cough. I can’t engage in any hard labour.

Besides, a lot of strange things have started happening to me.  Sometimes, I feel as if I am still in the mortuary.  I will be seeing a lot of heads. My sight is not normal, it sometimes fails me. I have also started giving messages to people about things that they don’t know about their family.

I started revealing to them what had happened in the past to their astonishment. This has made many people to run away from me with some describing me as a demon. To be sure that I am not a ghost, I tried to relate with my friends as well as eat with them. Despite this a few of my friends still avoid to shake hands with me, thinking that I am a ghost.

You ask where I live? To answer straight, I am homeless, because I am currently squatting with my younger sister, causing her and her family inconveniences.  Even though she is not complaining, I know that I am inconveniencing  her.

I have been given quit notice in Osogbo after my landlord heard of the incident. According to him, he could not live with Akudaaya (ghost). I stayed at No 1, Rasco Hall, Oke Fia, Osun State, Osogbo, It was the ejection that informed my living with my sister here (Abeokuta).

I need serious financial assistance from well-meaning Nigerians to take care of my health and sustenance.  Survival is difficult for me.  That is why I appeal to Nigerians to come to my aid. I want to stop being a burden to my sister and her nuclear family. I want individuals as well as corporate bodies and churches to help me financially. God will surely replenish their purses in abundance in Jesus name.

I had a broken home some years back and I remarried two years ago, but when the incident happened, the woman abandoned me and ran away from Osogbo.

I want to appeal to Nigerians and other people that there is God. I want them to believe that there is life after death; so we should do good to our fellow beings. Heaven and Hell are real.  Where we want to go is an option for us to decide. I want people to know that it is just a matter of seconds between life and death.