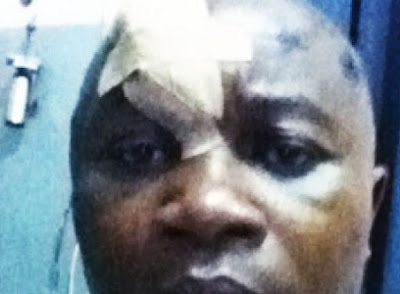 A man based in Owerri-Imo State is very happy to be alive after cheating death in a brutal gun attack last month.

Mr. Alex Anosike’s family are excited he’s alive after he miraculously cheated death in a gun attack to the head. The gunmen shot him six times – five shots in the head and one on the shoulder.

But for divine providence, Engineer Anosike’s family, pastor and members of his church would today be in deep grief. Rather than mourning over his death, they are praising God and celebrating his survival.

According to Sunday Sun, Anosike’s close shave began on July 21 shortly after service at the pentecostal church where he is a member, when some other members reported to the pastor that they had seen two strange young men in one of the uncompleted buildings within the compound of the church located in Naze Extension in Owerri North Local Government Area, Imo State.

On hearing this, the pastor (who does not want his name in print) and Anosike walked over to the uncompleted building to find out what the young men were doing in the place.

In recent times, residents of the Otamiri area of Naze Extension had been worried about the high level of insecurity in that part of the state capital, because of the activities of hoodlums who daily terrorize them despite the best efforts of the security agencies to rid the area of criminal elements. The abysmally low of security had driven fear into people who acquired land in the area, compelling them to delay developing their plots.

Recounting what happened on the fateful day, Anosike told Sunday Sun: “I was with my pastor when some members came to say that two young men were staying in a part of the uncompleted church building. So the pastor and myself decided to go and find out what the two strangers were doing in the uncompleted building of the church. Immediately they saw us, they ran off and jumped over the fence.

“We got curious, wondering why two people who came into our church premises would run off instead of greeting us. So we went towards the fence to know what was actually happening, but as we got close to the fence, we did not know that the men were hiding behind it and armed with a gun.

“Upon sighting us, they just started shooting. I was in the direct line of fire and received gunshot wounds. I immediately passed out. As I would learn after I was revived in the hospital, I got six gunshots – five on the head and one on my left shoulder. Immediately after shooting us, the two hoodlums fled. But my pastor was unhurt,” Anosike said.

When he regained composure, the pastor rallied round the members and rushed Anosike to the Federal Medical Centre, Owerri, where doctors made feverish efforts to save his life. He was then moved to Spring Hospital, a private hospital in Abia State.

The race to save him continuing, it was as if Anosike’s run of good luck was in full throttle. The bullets shot at his head had pierced the skull and lodged in the brain. None of the first two hospitals he was taken to (FMC-Owerri and Spring Hospital) had the facilities or expertise to extract the pellets.

Anosike takes up the tale again: “Because of the gunshots I received, blood had accumulated in my brain. The two hospitals I was first taken to (Spring Hospital in Abia State and the Federal Medical Centre, Owerri) lacked the facilities to drain the blood. Plans were already afoot to fly me abroad for surgery to drain the blood and extract the bullets. It was at this point that one of my friends told us about a good neurosurgeon in Imo State, who just came back from the United States. So, I was taken to Geoffrey Memorial Hospital in Owerri, which is owned by Dr Clement Opurum, a neurosurgeon. It was there that I underwent the first successful surgery and the blood in my brain was drained. The first two pellets were also extracted. As I speak now I still have four pellets lodged in my brain. But the doctor has assured me that when the brain reacts it will push them out to where they can be removed.”

Anosike is full of gratitude to the Almighty God for sparing his life. As he continues to recuperate in the hospital, joy is written all over him – one of the lucky few people who received multiple gunshots and yet lived to tell the story of their close-shave with death.

At the Imo State Police Command, Sunday Sun learnt from the Public Relations Officer, DSP Joy Elemoko, that the incident was actually reported to the police, assuring that detectives were investigating the case. While adding that the police had not yet made any arrests, she, however, acknowledged that the police were disturbed by the notoriety of Naze Extension as a den of criminals. The police spokesperson disclosed that the police had since reinforced its ambush squad to flush out all criminals from the area.