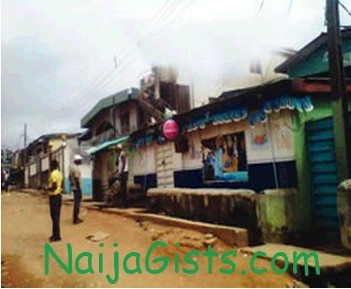 This bizarre happening took place in Abeokuta Ogun State Nigeria when the ghost of a dead man of 37 years suddenly reappears at a house in Mawuko in Odeda LGA of the state. naijagists.com

The ghost of late Sheikh Ibraheem Nyaas was reported to have suddenly appeared at a newly completed house in the area.

According to sources, Sheikh’s ghost was spotted on the wall of a building belonging to one Saubana Fadeyi.

The owner of the building claimed he started noticing a very faint brightness on the wall of his sitting room.

He stated the figure on his living room’s wall is the exact replica of the dead man .

“My wife first noticed it and she rushed out to inform me, when I also saw it, I was greatly terified, wondering how such thing could have happened”.

“My thought was that the ghost would eventually disappeared but on the second day, it brightens more and started showing on all sides of the building which made me ran to a pastor of a church near my house for assistance”.

His wife later advised him to seek help from spiritual leaders in the area in order to uncover the misery surrounding the ghost.

Guess they forgot to tell us what killed the man in the first place.

Someone might have used the poor guy for ritual or something.