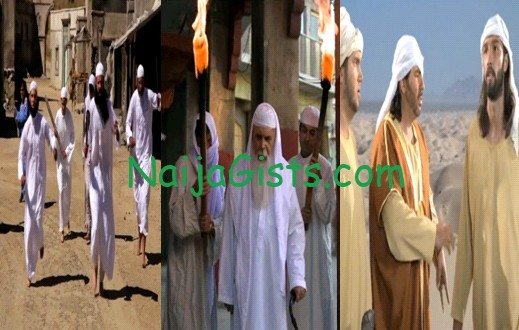 Innocence of Muslims movie is a new Prophet Muhammad (Mohammed) movie made by a film maker named Sam Becile that caused some Muslims protester to kill US Ambassador to Libya, Christopher Stevens and other American in Libya few days ago. naijagists.com

The alleged anti-Islam movie claims Islam is a lie and that Prophet Mohammed was a pedophile.

Innocence of Muslims movie has been rated as disgusting due to the riot it has caused all over the world.

Watch the Innocence Of Muslims movie trailer below

Since the onset of the violent protest about this very controversial movie on Prophet Mohammed and Islam titled “Innocence of Muslims“, I kept mum on producing any report on it but as at today, I’m compelled to write a report on it after reading the peaceful protest held by Arab Muslims in Israel today.

First we all have to acknowledge what religion is and how it affects our morals.

According to it’s dictionary definition: Religion is:

We should not blame Muslims for supporting their Prophet but the violent movement behind is the point of concern.

Apart from other religion in the world, Christianity & Islam are the majority.

Christians are taught to embrace peace even if something bad is said about Jesus whom they believe is the son of God.

As a Christian, we’re taught to avoid violence at all cost. My bible claims follow peace with all men and holiness without which no man shall see the Lord. Hebrew Chapter 12 verse 14.

If someone tears my bible in front of me, I will challenge the individual however, I will not kill him/her simply because it’s against my believe.

I have so many Muslim friends in Nigeria that are upset about the movie, Innocence of Muslims because of the way it portrayed Islam as a religion of violence. I support the outrage but the only thing I condemn is the violence that is attached to it.

God bless Muslim people in Nigeria and other parts of the world for not allowing violence of this sort.

Correct me if am wrong, unlike Christians who’ll not kill someone for tearing their bible, a radical Muslim might kill anyone who tear or burn any page of the Qu’ran right? Because that is their religious upbringing however some Muslim especially the ones I know very well’ll not engage in this type of behaviour it’s only Islamic fundamentalist that’ll kill others in support of their religion.

Christianity is a religion of peace and on the other hand, most of my Muslim friends in Nigeria are people of peace so that doesn’t portray all Muslims as violent people.

Whether you’re a Muslim or Christian, let’s all embrace peace, according to an article I just read on this site that forced me to pour out my mind on this controversial subject, we do not need violence to change the world.

Muslim or Christian, we need no VIOLENCE for the outside world to be converted.

I’m not sure if there is anywhere in the Qur’an that justifies killing and violence if someone says something bad about Prophet Muhammad however, killing innocent people all in the name of religion is not just.

LET’S ALL EMBRACE PEACE, IT’S ONLY PEACE THAT WILL CHANGE THIS HURTING WORLD.

WHETHER YOU’RE A MUSLIM OR A CHRISTIAN, WE ALL HAVE A COMMON CREATOR, THE ALMIGHTY GOD, who created the heaven and the earth.

He is not asleep neither does he slumber, he is watching our every deeds whether good or bad.

He will use our deeds on this earth to judge us on the last day.

Let’s keep that in mind

About the author: Seyi Ololade is an inspiration writer and an entrepreneur  based in Lagos state Nigeria, a seasonal author on this site – Email:ololadeseyimi@gmail.com)

Article edited for compliance by NaijaGists.com

Peace cannot be achieved through violence, it can only be attained through understanding. – Ralph Waldo Emerson

Heroism on command, senseless violence, and all the loathsome nonsense that goes by the name of patriotism – how passionately I hate them! – Albert Eistein

The pursuit of truth does not permit violence on one’s opponent.- Mahatma Gandhi

Let not him who is houseless pull down the house of another, but let him work diligently and build one for himself, thus by example assuring that his own shall be safe from violence when built. – Abraham Lincoln

Intolerance is itself a form of violence and an obstacle to the growth of a true democratic spirit. – Mahatma Gandhi

A person is born with feelings of envy and hate. If he gives way to them, they will lead him to violence and crime, and any sense of loyalty and good faith will be abandoned. – Xun Zi