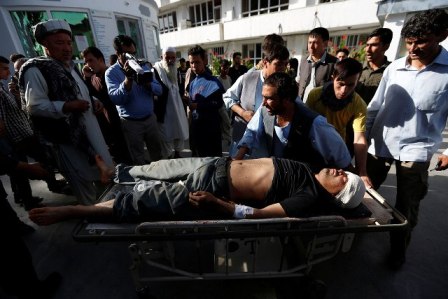 Not less than 80 people have been killed and 230 wounded in a double suicide attack at a demonstration in Afghanistan’s capital, Kabul, according to officials from the public health ministry.

The Islamic State in Iraq and the Levant (ISIL, also known as ISIS) group claimed responsibility for the blasts, which targeted members of the country’s Hazara minority.
Mohammad Ismail Kawousi, a spokesman for the ministry of public health, said the dead and wounded had been taken to nearby hospitals.

The attack in Deh Mazang square targeted thousands from the Shia Hazara minority who were protesting over a new power line, saying its route bypasses provinces where many of them live.

The Taliban have condemned the attack. Spokesperson Zabiullah Mujaheed sent an e-mail to the media saying they were not behind it.

Self-styled IS has a presence in eastern Afghanistan but has not previously admitted carrying out assaults in the capital.

An Afghan intelligence source told the BBC that an IS commander named Abo Ali had sent three jihadists from the Achen district of Nangarhar province to carry out the Kabul attack.

The interior ministry said only one attacker had successfully detonated an explosives belt. The belt of the second failed to explode and the third attacker was killed by security forces.