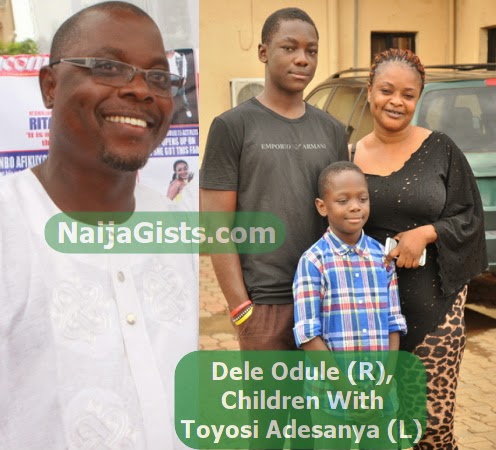 The actor talked at length about his rumoured affair with late Bisi Komolafe and how people see him as a disrespectful person.

Interviewer: A lot of people also complain that many Yoruba movies in the market lack creativity and are always about ‘juju’, can’t we have better movies?

Dele Odule: I have just said it all that the organisations in charge of maintaining standard are not doing their job. Even politics, are we doing it rightly? It’s about business. People now believe that when you have huge amount of money in your account, you can go into politics because you will make more. But it’s not supposed to be so. So it’s not peculiar to the movie industry. My conclusion is that nothing works effectively in Nigeria.

Interviewer: A veteran actor, Chief Lere Paimo, once accused you of not having enough respect for elders, it is said that you also have issues with Yinka Quadri and had an altercation with the late Bisi Komolafe on set.

Dele Odule: For Chief Paimo, I’ve known Baba for over 20 years. I think he started saying that Odule wasn’t respectful to elders after I decided to contest for the post of the President of Association of Nigeria Theatre Arts Practitioners in 2009. If you calculate 2009 till date, it’s around five years. If you remove five from 20, that should be 15 years. That means I had been good enough for him in 15 years. If for 15 years, I was respectful and for five years, I was not respectful, then something is wrong. I don’t want to say more than that.

Interviewer: What about the issue involving Qadri and the late Komolafe?

Dele Odule: I actually don’t have problem with the two of them. Yoruba people will say it’s not good to talk ill about the dead. That lady was a much younger colleague to me; in fact, I’m old enough to be her father, so I don’t want to talk about it. The fact remains that I never fought her for one day. All those things on the social media, I don’t know how they came about them. But there is no rumour without an iota of truth. What happened was purely politics. I’m an elder in the association and these young ones are not doing those things that they should be doing. For instance, you are a journalist and there is the Nigerian Union of Journalists, which should protect the ethics and constitution of the profession. If you are not doing it rightly, I want to believe that an elderly person there can tell you that. So if what I did by telling the late Komolafe that she had not done something rightly metamorphosed into a controversy, then it’s too bad. I don’t have any quarrel with Quadri, but I don’t know whether he and the lady had anything together. If that was why the issue transferred to him, I don’t know. But I know that I’ve never had any quarrel with Yinka Quadri.

Interviewer: We heard that Chief Paimo’s grudge was that Jide Kosoko was trying to impose you as the association’s president. Is that the case?

Dele Odule: Let us get this right, even if Kosoko is interested in Dele Odule, is it a sin? Have you ever heard Jide Kosoko said there must be no election? If the man working for me believes that I can steer the ship of the association, it is not a sin. But I’ve never heard anyone say that Kosoko said Odule should not contest an election, and that is where people are getting it wrong. But he has every right to support me. If truly he is interested in Odule because he believes that Odule can do it and now said, ‘Ok I want you people to follow Odule,’ does that mean that he has said that there must not be an election? That’s why we are fighting. So it’s not about Kosoko wanting to impose or not. That’s just sentiment.

Interviewer: You may not have 100 children but we hear you have about 10 children from different women.

Dele Odule: That is not peculiar to an actor alone. Muslims do have a lot of children. Former Head of State, late (Sani) Abacha, had many children and he was not an actor. MKO Abiola also had (many children). Sunny Ade (musician) also. The Bible says ‘stone that person to death, provided you have not also sinned.’

That is to say we all have one skeleton or the other in our cupboards. It’s just because I’m a public figure that people are privileged to know about my life and my privacy.