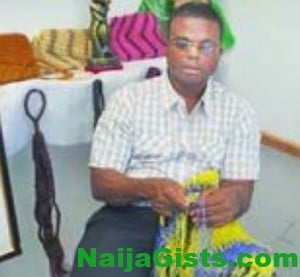 A blind weaver from Delta state Augustine Chuwkwudubelu Ubaka, is a classic case of ability in disability. He shone brightly at the just concluded 10th edition of African Arts and Crafts Expo (AFAC 2017) in Abuja, with his work attracting hordes of visitors to the state’s pavilion.

Ubaka, no doubt, left enduring impressions on participants at the 21-day event. Little wonder he was honoured with the inspirational award at the closing ceremony on September 17, by the National Council for Arts and Culture (NCAC); organisers of the arts and crafts exhibition.

Director General of NCAC, Segun Runsewe described Ubaka as a huge inspiration to the youth, whether living with disabilities or not. 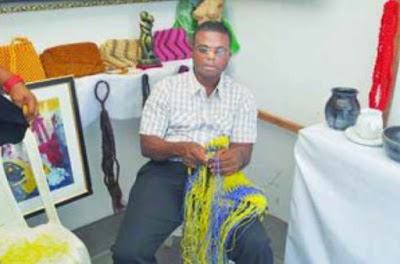 Ubaka, 44, lost his sight while he was about writing the Senior Secondary School Examination in 1992. The unfortunate incident led him to attending a school of craft for the blind in Lagos.

He told Daily Sun that his intention was to study the use of brail to enable him further his education.

But as fate would have it, four months to the end of his training in the craft centre, his instructor counselled him to learn a craft, preferably weaving.

Even though Ubaka had made his SSCE papers with the burning desire to further his education, he said looking back, the decision to venture into weaving was worth the while.

His works; mainly female handbags, mats, shopping baskets, decoration pieces and the rest, illustrate him as a rare artist and craftsman. His choice of colours, even when he is supposed to be ‘colour blind’ given his visual impairment, makes him a colourful artist who knows how best to use colours to achieve perfect aesthetic blending.

Ubaka, whose major tools are twine and polythene, tells his story thus: “It started when I was in secondary school while I was preparing for my SSCE. One night, I tried to put on my lantern and all of a sudden I could not see anything at all. Everywhere became dark and I could not read nor focus on the bulb or lantern at all. The next day, I had to rush down to the Niger Optical Service, behind Bendel Line of the old Bendel State where I was treated manually in order for me to continue my examination.

“Since I came back, I wasn’t able to scale through. So after my examination, I went to LUTH Eye Centre, Idi Araba, where I spent six years for the treatment of this eye issue. At last, the professor, a consultant that was handling the issue, told me that there was no remedy, because the fluid had been blocked. He said what I should do was to be concerned about learning a trade. As at then, I never had any idea that a blind person could learn a trade or go to school.

“I remained adamant until 2002 when my dad died. so I went home because then I was still in Lagos. But it was after the burial of my dad that it dawned on me that I had to face the challenges of life myself. So, I told my elder brother that I was tired of them giving me fish, and that I wanted them to teach me how to fish. They searched for a place and took me to the Delta State Ministry of Women Affairs, Community Development and Social Welfare where I was offered scholarship to study at the Nigerian Fine Crafts Centre for the Blind at Air Force Base in Ikeja Lagos.

“What I had in mind was to learn brail to further my education. At the school, I did excellently in brail reading and typewriting. But at last, my career guardian asked me to try this craftwork. Sluggishly, I entered the class about four months to the graduation. I never knew that was my destiny. In fact, I came out in flying colours; I made Nigeria and Delta State proud.”

On graduation, Ubaka returned to his home state Delta, where he has since 2006 touched numerous lives using a non-governmental organisation (NGO) to impart vocational skills to youths from different parts of the country, including female victims of human trafficking.

He said: “I’ve been a resource person for Delta State NYSC since 2007. I’ve trained thousands of corps members in every batch. I am always one of the facilitators and the fore founders of a skill acquisition programme called Skill Acquisition Entrepreneurship Development (SAED) in Delta State.

“I know that corps members that I had trained will be happy seeing their trainer receiving awards. I do teach people, most especially, the youth, because my work serves as a panacea to youth restiveness.

“I thank God I am a potential inspiration to the society at large. I have impacted positively on people’s lives. I train and currently train people in two schools under the Women Affairs Ministry of Delta State. One is under the Rehab Department where I train physically challenged persons, and the other one is for able ladies, mainly deportees. I have been imparting a lot on the youths.”

Interestingly, Ubaka’s contribution to Delta State attracted the attention of the then Governor Emmanuel Uduaghan, who offered him automatic employment on February 14th, 2013. He has since then been working in the Department of Arts, Delta State Directorate of Culture and Tourism.

He thanked God for bringing him honour in his first outing with the Directorate of Culture and Tourism as a staffer.

“It’s amazing. In 2011, when with an NGO, I won an award as the Best Corporate Complementary Exhibitor of the year. I am very happy that the federal government recognized my presence here as well. I am very happy because I know I am not the best among all; but by the grace of God, I was picked and given such magnitude of recognition. SO, I am happy and grateful to the Almighty God,” Ubaka stated.

The father of two boys urged physically challenged people not to depend on charity but instead, confront their challenges.

Asked how he was coping with the family, especially as the wife was unemployed, he expressed the optimism that by God’s grace, the wife would in a matter of time be duly empowered.

His words: “The just shall live by faith; that is my slogan. Proverbs Chapter 22 verse 29 says, ‘show me a man that is diligent in his work, he shall stand before kings and not before mere men.”

Looking forward, Ubaka said his dream was to go beyond the shores of Nigeria, visiting refugee camps and imparting skills to displaced persons so that they could have visible and verifiable means of livelihood.