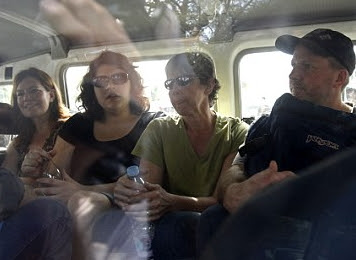 We gathered that the missionaries; Dr. David Donavan, Chilly Donavan, Alana and Iyan, had worked in the area for more than three years, preaching and administering free medical care to the people in the area.

Although there had yet to be any link with the kidnappers or report on ransom demand as at yesterday evening, security hunch pinned the act on a notorious militant gang, known as Karowei, operating in the area.

According to a police statement, the kidnap is suspected to be in reaction to the ongoing Operation Crocodile’s Smile, which is being executed by the Joint Task Force (JTF), codenamed Operation Delta Safe (OPDS).

“On 13/10/2017, at about 0200hrs, five armed suspected members of Karowei militants stormed Enukorowa creek community in Burutu LGA of Delta State and kidnapped four white missionaries, namely: Dr. David Donavan, Chilly Donavan, Alana (surname unknown) and Iyan (surname unknown), who have been engaged in preaching and giving free medical treatment in the area for the past three years.

“Intelligence reveals that the kidnap may not be unconnected with present onslaught on militant activities embarked upon by the military code – named Operation Crocodile Smile.

“All efforts are being made in conjunction with the Joint Task Force (JTF) towards ensuring that the victims are rescued, while manhunt for the kidnappers has been intensified”, a statement issued by the spokesman of Delta state police command, DSP Andrew Aniamaka, said.