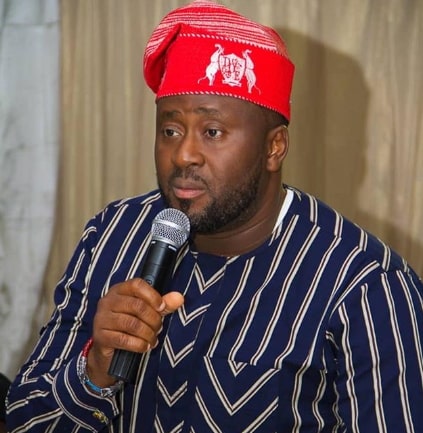 Hon Elliott who flaunted his new project in order to gain the praises of his fans has came under severe criticism from Nigerian Twitter users.

Here is how he announced the project on his Instagram page before unimpressed Nigerians expressed their dissatisfaction.

“So we constructed a makeshift cleansing mechanism, where passersby or people entering streets could wash their hands with soap and water and also sanitize before entering the streets -pilot works can be seen in these areas Olodeokuta, Ojuelegbe both sides, love gardening, Hogan Bassey, Masha bus stop, Shitta bus stop, Adelabu, Iponri, Bode Thomas and ishaga road.”

So I came across this embarrassment on Desmond Elliot’s page. What tf is this? An upgrade to the toilet? He even had the guts to put his Face there as per Philanthropist. I want to fight!. – Twitter user @danny_walterr wrote

“It is obvious those lovely films from Desmond Elliot may not actually be created by him. Menh if he could come up with this nonsense idea man is a scam. Except it is a case of if you can’t beat them you will join them in politics. Even bubu can do better than this”, @voiceofhope also tweeted.

Another user @westernerz wrote; “No matter how to expose, sound and diligent you are, once you go into politics your IQ of reasoning go from 100-0 real quick. Ask honorable Desmond Elliot”.

“Everything here no pass 5k so don’t come at me with “at least he’s doing something” because it’s obvious some of you have signed a Life sentence to mediocrity and I won’t be a part of it! It’s the Young one that we thought would be smarter! Smh!”.