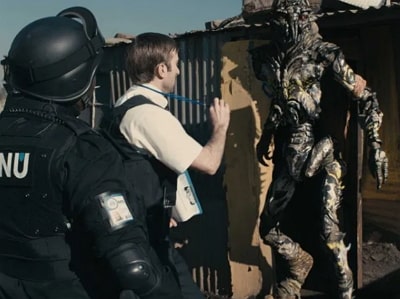 Most Nigerians have never seen and will probably never see the 2009 South African-made film. “District 9”. A sci-fi fantasy thriller that was immensely successful at home and abroad, the film depicts a South Africa invaded by two alien groups, one comprised of Nigerians and the other of giant prawn-like extraterrestrial beings from outer space. The ugly, misshapen and menacing aliens from outer space have their abode in a huge spacecraft hovering over Johannesburg. The other alien group, the “Nigerians” are quartered in a crime-ridden, drug-infested area of the city over which they exercise uncontested but severely confined control. Their leader is a hoodlum whose name is – Obasanjo! Remember this, dear reader: in the period when the film was written, shot, and edited before being released in 2009, Olusegun Obasanjo was the president of Nigeria. And given the fact that “District 9” adopted a pseudo-documentary narrative style, its allusion to Nigeria as an object of its devastating negative critique is unmistakable.

It was bracing for me to watch “District 9” when it was released to wide critical acclaim and huge commercial success. For this reason, I have never watched the film a second time. Its critical and commercial success is based on the fact that whatever I or any Nigerian may say about it, it is a very entertaining film. The naïve, anti-heroic “hero” of the film is an ordinary, likable guy who tries to understand and bond with the menacing aliens from outer space. As a matter of fact, in the course of the film he gradually metamorphoses into one of them after he is accidentally bitten by one of the aliens. And it turns out that the extraterrestrial aliens come from a civilization that is far in advance of our own earthly civilization. At any rate, the prawn-like aliens manage to repair their damaged spaceship and at the end of the film depart from Joburg, from our planet, leaving us to our phobias, our inanities, our fears and hatred of the “other”. Everyone is relieved to see them leave.

But not “Obasanjo” and the “Nigerians”! They want the aliens handed over to them to be killed and consumed in the atavistic belief that the aliens’ power will be ritualistically transferred to them. This is beside the fact that the aliens are, after all, giant prawns – what do you do with prawns? This is the ultimate coup de grace in the film’s racist and xenophobic assault on Nigerians and black people: as the whole world marvels at the advanced civilization of the aliens, all the “Nigerians” care about is a cannibalistic ritual transfer of the aliens’ knowledge and power to them. This brings to my mind a forgotten or little-known fact about Olusegun Obasanjo. What is this fact?

Well, at the height of the armed struggle phase of the continent-wide anti-apartheid movement, Obasanjo, the real Obasanjo, our own Obasanjo, once infamously boasted that with a single battalion-strength force of the Nigerian army, he could invade South Africa and conquer the whole of the army, air force and navy of the apartheid regime because he had the charms and the supernatural fortifications to effect such a victory.

It is tempting to see the director and writer of the screenplay of “District 9”, Neill Blomkamp, going back to this story of our Obasanjo for inspiration in the depiction of the “Obasanjo” of his film who wants to cannibalize the aliens in order to absorb their power into his person. Of course, far beyond the real and/or fictional Obasanjo, “District 9” gestures toward and recycles enduring apartheid myths of black African primitivism and savagery. The film’s “success” in this regard was to have successfully displaced to “Nigerians” the inferior and savage “otherness” which had been directed at black South Africans for centuries but which could no longer be continued openly in the post-apartheid era. In other words, “District 9” found in the xenophobia and hysteria against Nigerians in South Africa the means through which it could make black and white South Africans “comfortable” with an open, even blatant display of residual aspects of apartheid-era anti-black racism.

Crime or, more generally, criminality, is the foundation of the enabling xenophobia and hysteria. And indeed, “District 9” is stunning in its assumption that all South Africans, black and white, could be counted upon to accept that “Obasanjo” and the criminal gang of “Nigerians” in the film constitute an accurate reflection of widely held perceptions of Nigeria and Nigerians in South Africa.

We must brace ourselves, compatriots, to confront this terribly confounding idea that the crimes and criminality of some Nigerians in many countries and regions of the world come from and are lodged in Nigeria itself. Let us not make light of this fact: in the recent xenophobic hysteria in South Africa against virtually all the nationals of other African countries, Nigeria was singled out and the basis for this was the alleged dominance of the criminality of Nigerians over that of all the other national groups combined. The assumption behind this belief or perception is that the alleged Nigerian exceptionalism in criminality could have come from nowhere but Nigeria itself.

We must of course completely refute and reject this idea. This is because no matter how seemingly ‘true” the idea may be, it amounts to nothing more than the literal observation that since Nigerians come from Nigeria – and can only come from Nigeria – the crimes and criminality they might manifest in other parts of the world come from Nigeria. But this is ridiculous and it is tautological. Does the altruism, the brilliance in the arts, sciences or technology that many Nigerians show in many parts of the world also come from and are lodged in Nigeria itself? What is peculiar about crime in general and the criminality of Nigerians abroad that so many people, including Nigerians themselves, trace its origin, its essentiality to Nigeria itself? That is the nature of the problem that we face in this issue, compatriots. When Nigerian criminals abroad are deported back to Nigeria – as has happened on countess occasions – that is the imputed belief: go back to where you brought your criminal propensities and acts!

No single event is more indicative of this issue than that of the notorious CNN “60 Minutes” broadcast about two decades ago on corruption by Nigerians and in Nigeria. Led by the late Mike Wallace, the “60 Minutes” crew came to Nigeria and with hidden cameras and microphones recorded high public officials demanding and receiving bribes from members of the crew. In the most astonishing episode of all, the broadcast showed Mike Wallace, a white Jewish American, paying for and receiving a Nigerian passport which stated that his state of origin was Ekiti State! One secretly recorded episode took place at the Head Office of the Central Bank, then still in Lagos; it showed Wallace bargaining with an official of the bank on how much a transaction involving forex would cost the American and his putative Nigerian principals. The official involved was apparently so secure in his nefarious practices and so complacent in his belief that he could and would never be caught that he divulged to Wallace all the means by which the American could obtain clearance or certification for any deal he wanted to make in the country, no matter how illegal and improbable it was. Indeed, it was from this experience of the secret filming of Nigerian criminality at home, official and non-official, that Wallace later made his infamous declaration that Nigeria was the most corrupt country in the world. Unfortunately for him, Wallace made the declaration while doing an interview with Minister Louis Farrakhan of the Nation of Islam who was so outraged by that declaration that he countered that not Nigeria but America was the most corrupt nation on the planet. Kudos to Minister Farrakhan, but alas, many Nigerians too think, like the late Mike Wallace, that their country is the most corrupt country in the world. And if that is the case, can you blame South Africans for thinking the same thing?

My response to this question is unequivocal: yes, you must blame South Africans, you must blame Americans, you must blame Filipinos, and you must blame Nigerians themselves who think that Nigeria is the most corrupt country in the world. There is simply no such country in the world where corruption and/or criminality is at its unquestionable highest. Yes, Nigeria is one of the most corrupt countries in the world. But so is South Africa and the USA and Brazil and Afghanistan and many countries in Africa and Latin America! Right now, at this very moment in time, which country in the world is close to the level of corruption of great impunity that it tolerates in its leader and head of state as Donald Trump’s America? And beside Trump himself, what of the uncountable cases of corporate greed and corruption in the US? This is well-known and no one has ever used it to stir up hysteria and xenophobia against Americans as Americans the way Nigerians, simply for being Nigerians, have been targeted with hysteria and xenophobia in South Africa and other places in the world.

This last observation brings me to my closing reflections in this piece which pertains to benign and even humorous forms of hysteria and xenophobia against Nigerians and their presumed national penchant for corruption and venality. The aforementioned “District 9” is a vintage example of this kind of “benign” hysteria against Nigeria. This is because while no physical violence and no forceful expulsion are urged against “Obasanjo” and the “Nigerian” criminals in the film, they are nonetheless consistently depicted as objects of absurdity and derision. The same principle or logic applies to the profiles of Nigerian criminality in American television, radio, newspapers and social media: the depiction is so full of real or feigned surprise at the temerity of Nigerian fraudsters and scammers that you begin to think that there is a secret admiration for the criminals! On many occasions, I have heard jokes on Nigerian “419” and other online or Internet scams by standup comics and even the iconic “Saturday Night Live” of the NBC. Indeed, so widespread is this phenomenon that one colleague at Harvard once asked me why, since Nigerians were apparently so “clever” they did not apply that “cleverness” to other things? My response to him? I said: “you mean you have not noticed that at Harvard and other Ivy-league universities and their public counterparts second-generation Nigerian Americans are second only to Asian Americans in performance and achievement?”

In the early 1970s when I was a graduate student at New York University, there were many other Nigerian students at NYU itself and other universities in New York and around the country. We were very noticeable too then as a high-performing national group among other nationals from the African continent and other parts of the developing world. “419” and other infamous frauds and scams were nowhere yet in sight. Thus, our achievements did not have to be measured and balanced against the dubious “cleverness” of fraudsters. Criminality is not an essential or permanent aspect of Nigerianness. This era of the PDP-APC kleptocratic predatoriness shall pass. Ergo: Nigeria will not always be one of the most corrupt places in the world. For those who would use the facts and the perceptions of Nigerian criminality at home and abroad – be they Nigerians and/or Non-Nigerians – as the measure of the country’s essence, we must say a resounding “No’! In other words, take away the excuse, the rationale of criminality and xenophobic hysteria will have no legs on which to stand – in South Africa and other parts of the world. If you ever get to watch “District 9”, keep these admonitions in mind, compatriot.