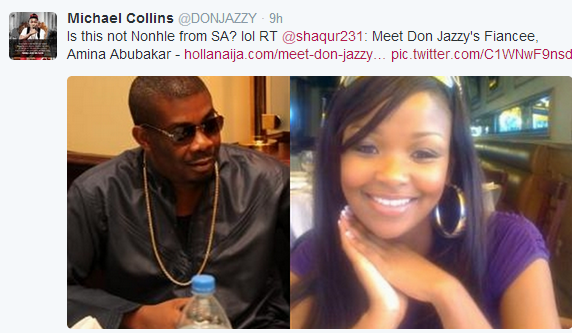 Don Baba Jazzy has come open to deny his rumoured engagement to the daughter of Atiku Abubakar.

Few hours ago, rumormonger took to their heels to spread the unfounded rumour that the Mavin CEO proposed to Aminat Abubakar in South Africa.

The false report further said Aminat didn’t tell his father about the proposal due to fear of rejection.

Don Jazzy has responded, he said the story is misleading. The lady in the picture going viral is Nonhle Thelma from South Africa.

The funny story came about as a result of a conversation that started between the former Vice President of Nigeria and Don Jazzy last year. Atiku claimed Don Jazzy is richer than him.

Read Don Jazzy ‘s response to the story below:

Atiku must be smiling wherever he is now…. False stories travel fasting than the speed of light.

5 thoughts on “Don Jazzy Denies He Proposed To Atiku Daughter”