November 9, 2016 – Donald Trump Is The Projected Winners Of US 2016 Presidential Election

Check out what is happening in the US right now.

After almost all Americans cast their ballots on Tuesday to determine the next US President, Clinton and Trump are both vying for the 270 electoral votes needed to win the 2016 presidential election.

Donald J Trump now needs 26 electoral votes to become the next US president. 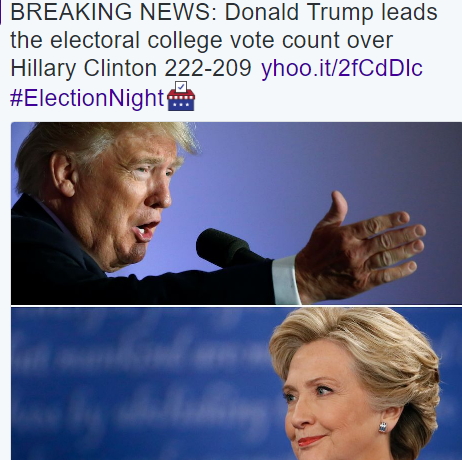 Some media houses has declared him the winner while the major media houses like CNN, NBC and others are still hoping the odd might turn in any of the candidates favour.

IT seems most democratic voters refused to vote for Hillary while the Republican came out en mass to vote for Trump.

From the look of things, Americans especially men are not ready to have a woman as their next president.

Most fans of Hillary Clinton were seen crying last night.

We shall see how this unfolds….

Continue Reading
You may also like...
Related Topics:donald trump is the projected winner of us presidential election