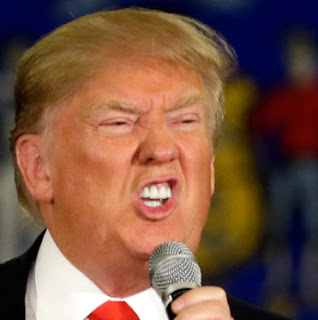 Dec 7, 2017 – Donald Trump’s Presidency, A Tragedy For The American Republic

Before Donald Trump was sworn in as US president in January this year, the phrase “American strongman” would have seemed utterly ludicrous, if not downright oxymoronic. Why? Americans have for so long prided themselves in the sophistication of their liberal democratic system of government, on the assumed integrity of their elected leaders to always conform to established time-tested democratic norms, and on the strength and vitality of their state institutions to impartially and objectively coax their leaders to exhibit civilized conduct.

These are the veritable assumptions that have been sold to the rest of the world and it explains why the US is often held up as the exemplar or archetypal liberal democracy.

Americans have carefully cultivated this image and patented it so well that their public officials often arrogantly lecture and even chastise the rest of the world on the basis that their democratic system is the perfect example to be emulated. And for decades, people of the developing nations have had to endure lectures, insults, harangues and condescending treatment by US political and diplomatic officials who swagger all over the continents delivering elementary lectures on democratic governance.

What exactly is the point in all this? Am I implying that democracy is not good? Of course not! It is just that we have all been so starry-eyed, possibly deceived, by all the stated qualities of American democracy to the point that we accept American government as the veritable yardstick for measuring liberal democratic performance. That’s not necessarily bad. However, we ought to be more skeptical of received knowledge, be more nuanced and critical in our acceptance of received wisdom.

Democracy is good, and I align myself with the late Professor Claude Ake’s submission that that though democracy may not necessarily solve all our national problems but none of our problems can begin to be solved without democracy. So democracy must stay. My point here is that, as a system of governing society, democracy has to be adapted suitably to the local conditions in each place, not adopted without the necessary modifications. Anyway, this piece is not a discourse on the tenets of democracy but about what I think is the assumed resiliency and capacity of US state institutions to checkmate their presidents from becoming imperious strongmen.

Let’s face it, hardly any American president is a saint when it comes to behaving badly and against established norms, but none, perhaps with the exception of Richard Nixon, has been as whimsical, willful and deliberate in subverting the institutions of the state for personal reasons as much as Donald J. Trump. In less than one year in office, he has twisted American governance system out of shape, serially attacked the military and security establishment, derided the US Congress and unleashed vitriolic verbal and Twitter assaults on legislators, insulted the judiciary, and harangued the mass media as purveyors of fake news. Many are perplexed at how one man can so egregiously subvert the essence of democratic governance virtually unchecked. He is a serial liar, egomaniac, and wantonly disrespectful of protocol and civilized behaviour. Now Americans are having a taste of one-man dictatorship, or what I here call “democratic despotism” that we in Africa have endured for decades since most of our countries gained independence in the 1960s. Donald Trump was democratically elected and is therefore expected to govern also democratically, but he is without question a despot at heart, hence the appropriateness of the phrase.

The oxymoron, “democratic despotism,” is intended. Truly, there are democrats and there are despots, but when a democrat rules like a despot, he becomes a democratic despot! This is the only way I can characterize President Trump’s conduct since January. Though a democratically elected as leader of the world’s most powerful democracy, his conduct thus far generally exemplifies the characteristics of an autocrat, a veritable third world ‘strong man.’

He has deliberately and methodically tried to weaken and subvert every institution that he does not like or cannot yet bend to his will. This is not as strange as it seems. Instead, it is vintage Donald Trump: ruthless business mogul, egomaniacal host of a reality television show. An exasperated David Remnick, editor of The New Yorker, calling Trump’s election “An American Tragedy” wrote on November 9, 2016, the day after the US presidential election:

“The election of Donald Trump to the Presidency is nothing less than a tragedy for the American republic, a tragedy for the Constitution, and a triumph for the forces, at home and abroad, of nativism, authoritarianism, misogyny, and racism. Trump’s shocking victory, his ascension to the Presidency is a sickening event in the history of the United States and liberal democracy.”

Almost one year into his tenure, I fail to see that anything can be taken away from Remnick’s graphically unflattering portrayal of an American tragedy. In less than one year, Trump has single-handedly taught the world more about the hidden hypocrisies of liberal democracy, about how democracy is actually despotism in disguise, about how easy it is for democratically elected but autocratically-inclined individuals to systematically subvert its theoretical and practical essences by routine demagoguery and by casually ignoring so-called established institutions, or simply rendering them irrelevant and toothless. Is there any major US institution left that he has not yet ridiculed or subverted…the judiciary, individual judges, the national security and intelligence community, the Congress, the GOP on which ticket he climbed to power, name it! And what about the mass media! He calls the mainstream media “fake media” and at one time advocated jailing of journalists.

Donald Trump has proven to be a compulsive liar, an egomaniac who routinely discountenances inconvenient truths and relies on what his aides casually refer to as ‘alternative facts’, casually snubs foreign leaders that he doesn’t like, treats others with condescension as if they are mere employees of Trump Towers who must genuflect before him, acts whimsically and eccentrically without requisite knowledge or deep understanding of critical issues, and luxuriates in his self-delusion of imperial grandeur and power. This guy is simply uncouth and ill-mannered, celebrates fellow ‘democratic autocrats’ like Recep Tayyip Erdogan of Turkey, Fatah el-Sisi of Egypt and Rodrigo Duterte of Philippines as ‘great’ leaders.

He daily exudes intellectual shallowness and a lack of the elementary finesse and political sophistication usually associated with American presidents. It is difficult to disagree with those who have written him off as profoundly bereft of the most rudimentary gravitas for high public office.

All these remind one of some of Europe’s infamous 20th century despots like Adolf Hitler, Benito Mussolini, Josef Stalin, Antonio de Oliveira Salazar in their eerie resemblance to today’s Donald Trump.

In reality, he is the very exemplar of what the late eminent Professor Gabriel Olusanya would have called an “Area Boy Diplomat”! One should not be surprised if Americans who voted him into office as their president are already secretly regretting their bad judgement.

I can wager that by the time he completes his first four years, America’s liberal democratic system would have been so comprehensively bent out of shape it would hardly be recognizable any more. As I once asserted in an earlier piece in this newspaper, Americans may deserve Donald Trump because they elected him, but the rest of the world could certainly do without this monstrosity of a modern-day Nebuchadnezzar.

The good thing about this sordid development in modern American governance, as Professor Bolaji Akinyemi once pointed out, is that it will temper the arrogance of American diplomats who enjoy lecturing the rest of the world on democratic behaviour.

President Donald Trump is such a bad advertisement for democratic leadership that even veritable African despots are beginning to look like tame.

Tithes: To Pay Or Not To Pay
“Football Betting Is A Great Sin In Islam” – Says Nigerian Calling For Ban Of Naija Bet In Borno State