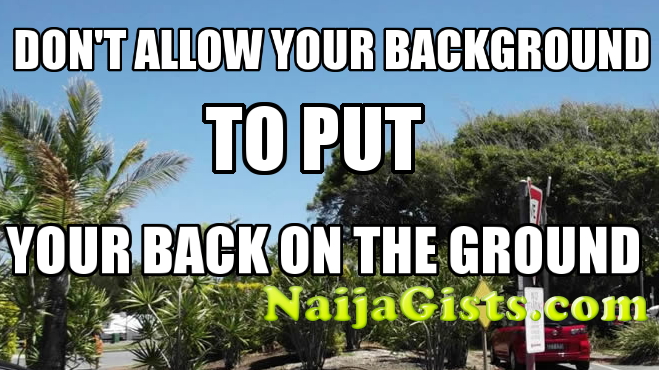 Where you are coming from is not what defines you but rather where you are going in life.

You must endeavour in life to ensure that where you are going in life does not in any way look like where you are coming from! No matter what you are going through in life, you can rise above your background. So many people have risen beyond their ‘shabby’ backgrounds to become people of substance and great impact.

I have often said that you can’t feature in a future that you can’t picture! The best way to be happy with your future is by playing an active part in it. If you’re just a spectator of collective fate, you’re bound to feel frustrated. We must refuse to live as hostages to fate!

Someone once said, “I am on the hunt for who I’ve not yet become”. One of the craziest tasks that I normally ask my mentees to do is writing a letter to their future self. This task most of the times have been a redefining moment in the lives of my mentees as they write an open letter to their ‘anticipated self’! You must progressively live your life in such a way that you keep evolving a better ‘you’.

Christine Mason Miller once said, “At any given moment in life, you have the power to say: “This is not how the story is going to end”. Life is full of amazing stories of people rising from obscurity to stardom, from a ‘mess’ to become a divine messenger, from breakdown to pioneering a major breakthrough. Our biggest problem in life is self-awareness, the ability to fully realise who we are and what we are truly capable of doing.

“Most people don’t know who they are, so they die as someone else”- Myles Munroe

Where there is no faith in the future, there is no power in the present. The inspiring and ‘dare to dream’ story of the Kenyan prodigy, Lupita Nyong’o, is so fascinating and inspirational. 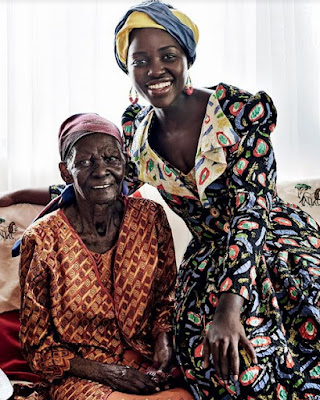 Born Lupita Amondi Nyong’o in Mexico to Kenyan parents in 1983, a graduate of the Yale University School of Drama’s Acting Program. In 2014, Lupita Nyong’o won the Oscar for best supporting actress at the 86th Academy Awards for her harrowing role as Patsy in Steve McQueen’s “12 years a slave’’.

The film represented a major triumph in the life of the Mexican-born, Kenyan-raised actress, who came to acting relatively late and probably from obscurity. “12 years a slave” was, incredibly, her first film. Her most memorable scene was where she receives a flogging for wanting to wash with soap.

She was up against some stiff competitions and veteran actresses: Jennifer Lawrence for “American Hustle”; Julia Roberts for “August: Osage Country”; Sally Hawkins for ‘‘Blue Jasmine”, and June Squibb for “Nebraska.” Needless to say, the “12 years a slave” winner looked stunned on her way to receive her Oscar. Nyong’o then delivered a beautiful, moving speech.  She expressed her wish that her unknown-to-Oscars trajectory would inspire someone watching the Oscar award at home to go for it.

Lupita has been a positive representation of the new generation of African youth. She is a constant reminder that no matter whom you are, the background you are from, or your circumstances in life, if you dream big and work hard then success is inevitable.

Lupita concluded her speech by saying; “When I look down at this golden statue, may it remind me and every little child that no matter where you’re from, your dreams are valid”.

How can we ensure that our circumstances and situations do not put our back on the ground? I will be looking at some of the most pertinent points:

STOP MAKING EXCUSES: Most people are held back in life because of their penchant for making excuses. Benjamin Franklin said, ‘’I never knew a man who was good at making excuses who was good at anything else.’’ A victim mind-set causes people to focus more on what they cannot control to the detriment of what they can control. It is a recipe for recurring frustration and failure.

Nobody or circumstance must be the reason why you fail in life. Learn to take responsibility and ownership of your future. The best way to predict the future is to design it. Until you cultivate the habit of living above your excuses, you will continue to live an inferior life.

We really start to live, the moment we develop the strength that is stronger than our excuses. So many people, by rejecting and excusing themselves out of taking responsibilities, have actually eliminated themselves out of any opportunity to grow. It is easier to go from failure to success than it is from excuses to success. Quit the excuses to live a life that you want!

DREAM BIG: Farrah Gray said, “Build your own dreams, or someone else will hire you to build theirs”. The life that you seek is hidden in your dreams!  The easiest way to hinder the future is to kill the dreams of today. Let your dream be so big that it becomes obvious that without God, it is bound to fail. Two men approached God with their dreams; one was dreaming for a loaf of bread, the other was dreaming for a bakery.

God in His infinite wisdom gave the second man the bakery so that he can give the first man his bread. Big dreams attracts God; small dreams attracts people! Don’t downgrade your dream just to fit someone’s reality. Don’t ever give up on your dreams, and when someone tells you “it can’t be done”, it doesn’t mean you can’t do it, it simply means you can’t do it with them! Robert Conklin said, “Dreams get you into the future and add excitement to the present”. Go confidently in the direction of your dreams; live the life you’ve imagined.

DON’T SETTLE FOR LESS: Maureen Dowd said, ‘’The minute you settle for less than you deserve, you get even less than you settled for”. The greatest tragedy of life is not that we set high aim and miss it but that we set low aim and reach it! Strive to never settle for less in every area of your life: In your marital life, career, academics and ministry. Work hard and don’t be lazy around your goals. Bishop David Oyedepo once said, “The only substitute for hard work is hard life”.

BE DISTINCT OR BE EXTINCT: Why try hard to fit in, when you were born to stand out; wanting to be someone else is a waste of who you are! Ralph Waldo Emerson once said, “To be yourself in a world that is constantly trying to make you something else is the greatest accomplishment”.

The greatest journey in the pursuit of excellence is to be distinct because you will never influence the world by trying to be like it. Your uniqueness is your selling point and it must never be negotiated. Do not follow where the path may lead, go instead where there is no path and leave a trail! Mike Murdock said, ‘’Your significance is not in your similarity to another, but in your point of difference from another”.

MAKE ‘CHANGE’ MANDATORY: Life does not get better by chance, it gets better by change. Joyce Meyer said, “You can suffer the pain of change or suffer remaining the way you are”. The destination that we crave does not exist. We need to make several adjustments and changes to get there. Max Depree said, “We cannot become what we need to be by remaining what we are”.

MAKE TIMELY AND RIGHT DECISION: Lee lacocca once said, “Even a correct decision is wrong when it was taken too late”. Life is not only about making decisions but timely decisions! It is often said that decisions determine destiny! Stephen Covey said, “I am not a product of my circumstances. I am a product of my decisions”. In life, you cannot make progress without making decisions. Anthony Robins said, “It’s in your moments of decision that your destiny is shaped”.

GET A MENTOR: There is only one short cut to success and it is getting a mentor! A mentor is someone who sees more talent and ability within you, than you see in yourself, and helps bring it out of you.  Zig Ziglar said, “A lot of people have gone further than they thought they could because someone else thought they could”. A mentor will stretch you beyond your comfort zone and help you realize your latent potentials. Isaac Newton once said, “If I have seen farther than others, it is because I was standing on the shoulders of giants”.

AUDIT YOUR RELATIONSHIP AND CUT-OFF THE WRONG PEOPLE: When a man fails in life, his friends are the first set of suspects! The real identity of a man is not to be measured by performance but relationships. Brian Tracy said, “Your choice of people you associate with will have more impact on what you become than any other single factor”. Stop building your life around the people and the things that do not add up to your destination. Jack Canfield said, ‘You become like the people who you spend most of your time with”. Our company determines what accompanies us in life.

Gautama Buddha said, “If you do not change direction, you may end up where you are heading”. You cannot change your destination overnight but you can change your direction overnight. I am using this piece to reach out to everybody out there with a very humble beginning.

I want you to believe strongly that behind you is infinite power; before you are endless possibilities and within you are boundless opportunities. Whatever becomes of you is your responsibility. Don’t ever allow your conditions to determine your destination. No matter where you are from, no matter what you are passing through, no matter how obscure you think you are, no matter your limitation, you can rise beyond your background.

QUOTE OF THE WEEK: “I am the master of my fate and the captain of my destiny”- Nelson Mandela

Continue Reading
You may also like...
Related Topics:background, monday, quote

Saturday Inspiration: You Were Born An Original, Don’t Die A Copy!
Why Loving Yourself Is So Important!