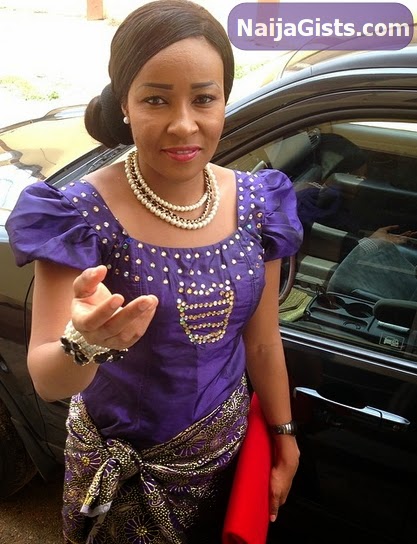 Nollywood actress Doris Simeon who is yet to see her son since her colleague allegedly snatched her hubby and moved to the United States of America few years back has opened up again.

In an exclusive interview with City People, Doris Simeon said she has moved on. The mother of one also said that the encouragement she received from her parents is what kept her going.

How was growing-up for you?
I grew up in Ojota and growing up for me was very interesting and comedy-like, from a ghetto kind of home. I learnt a lot of things from that environment, it was really fun for me. Living in a face-me-I-face-you house, whenever you put the experience together, it is always like a movie and then you hear other people’s silver-spoon story but I think the ghetto own is the best. You gain a lot of experience from people you grew up with, “Aunty Adugbo” and “Uncle Adugbo”. It was really fun for me.

You seem to have moved on after your marriage break-up, what really led to the break-up?

Obviously, life, goes on. Shit happens. If it is not working well, walk out of it. You don’t have to die on whatever it is. It is just one of those things.

What has kept you going after all the controversies?

My God and the advice of my parents. Though, they are late but their prayers and the way they groomed me to this level before they passed on has really kept me going.

How where you able to stand after the whole saga?

It is not easy but I just had to sit up and think about it, if you die in your agony what would be left for whoever you have behind. It is better to sit up. That is why they said, ‘when there is life, there is hope’. Sit up and think of the next step you have to take and think of how to be a better you and affecting people’s lives positively.

Did you think it could happen?

Nobody would ever think of anything bad to themselves. Everything that happened, God knows it.

E no easy but life goes on.