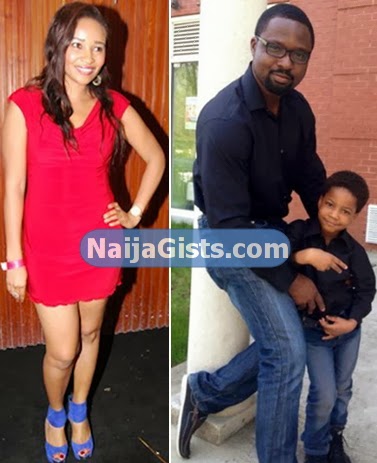 Days after Nollywood film producer Daniel Ademinokan sent out false news claiming he has returned Doris Simeon‘s only child to her, the actress has denied the claim.

Do you remember the story NaijaGists.com shared with you few days ago? if you missed, read it here.

It turned out that the false alert was passed across to media outlets by Doris Simeon‘s ex-husband, Daniel Ademinokan who escaped with actress Stella Damasus to the United States of America last year.

Daniel allegedly snatched Doris’s only child from her days before their escape.

He took the boy with a promise to return him the same day but alas, he never showed up.

As we speak, Doris Simeon just returned from an official engagement in Dubai.

The actress said this through her publicist earlier in the week:

“David Ademinokan, the product of Doris Simeon and Daniel Ademinokan’s seven-year-old marriage has not spoken or seen her mum since he was whisked away by his dad on the pretence of visiting his grandmother several months back.

“There is no iota of truth in the tale that Daniel Ademinokan has returned the young and intelligent David, who would have no doubt missed the presence of his mother greatly, in the last 13 months.

“It would be a thing of joy and great tidings should David be returned to his mum for the undeniable motherly care he would have missed over the years.”

As we speak, sources claim Doris Simeon is troubled by this development.

“It should be noted that I am yet to gain custody or reunite with my son after he was taken away by his father several months back. If and when David reunites with me,  it wouldn’t be a thing to hide as both of us had always had a blossoming and amazing relationship that exists between true mothers and children.” – Doris Simeon said

Even if Daniel refused to return Doris’s only child, why can’t Stella Damasus convince him to return the boy?