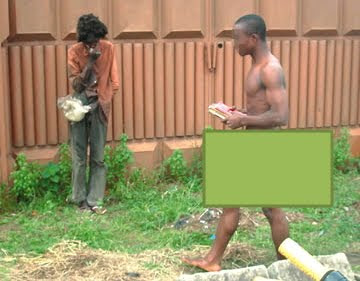 Residents of Oke Ado part of Ibadan, Oyo State, Nigeria on Thursday June 28, 2012 watched the drama of their life involving a pastor and a mad man.

According to an eyewitness, the pastor named Timothy went to conduct deliverance for a mad man named Tunde at Ososami Junction of Oke Ado at about 5:20pm.

We learnt Tunde was sitting in front of a building at the time.

According to a shop owner, Semiu who witnessed the drama, the pastor began reading the bible on sighting the mad man. He later moved closer and laid his hand on him.

“At a point, there was a hot argument between the duo, which made the pastor to raise his voice as he was offering a deliverance prayer for Tunde, the mad man. The hot prayer lasted for over 15 minutes before another strange drama began,” Semiu stated.

According to an Okada rider who also witnessed the drama, the mad man forcefully removed the pastor Timothy’s hand from his head and all of a sudden, a strange spirit came on the pastor and he began removing his cloth.

Within few minutes, he was totally naked and laid flat on the ground, speaking strange languages, with foam oozing out of his mouth.”

The mad man initially left him in this position and sat at some distance away from the pastor, before the duo later sat closer to each other, while onlookers watched the strange drama.

As at the time of this report, the pastor remained in a state of insanity.