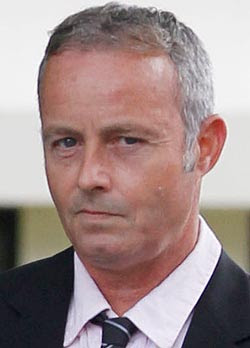 June 29, 2012 – According to a report culled from the sun uk, a woman refused to go to bed with her ex-husband found him having sex with her dog soon afterwards, a jury heard today.

Naked Nicholas Saunders whistled Sasha the bull mastiff to his ex-wife’s bedroom, it was said.

Stunned Kelly Thacker, who had gone downstairs to sleep, told police she opened the door to the shocking scene.

Prosecuting, Frank Abbott said Ms Thacker “found it difficult to believe” when she saw Saunders “clearly trying” to have intercourse with Sasha. Mr Abbott said: “Ms Thacker just couldn’t believe what she was seeing to start off with so she looked away and then looked again.”

Shocked Ms Thacker told 46-year-old Saunders “in no uncertain terms” to leave her house, Mr Abbott told Gloucester Crown Court. The dad-of-two later agreed to have a swab taken – and dog DNA was found by a forensic scientist, the court heard.

Mr Abbott said Saunders had gone to see his ex-wife – they married in 1999 and separated three years later – after being kicked out by his girlfriend. She agreed to let him stay the night in her bedroom – but made it plain she would not be having sex with him and would be sleeping downstairs.

They chatted for half an hour before going upstairs to her bedroom where she sat on the bed as he got undressed and got in it.

The dog turned up and Saunders said to it: “You’ve just ruined my chances”, said Mr Abbott.

He added: “You may think that he had rather hoped to have sex with his ex-wife, and the dog getting on the bed had got in the way.”

Later Ms Thacker heard Saunders whistling the dog to go upstairs. She followed it up – and then saw her husband having sex with Sasha, said Mr Abbott.

The prosecutor said when Saunders was arrested he told cops the dog had got on the bed when he was naked and woken him up by licking his face.

He denied any indecent act had occurred but refused to make any further comment. The prosecutor said the jury would be hearing from forensic scientists for both the prosecution and defence.

Saunders, of Lechlade, Gloucestershire has pleaded not guilty to having intercourse with an animal. Trial continues.(the sun uk)