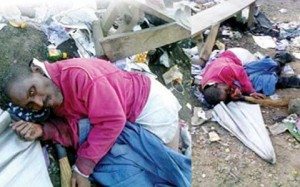 It is indeed tragic that such could happen in this country. What exactly happened to Dr. Olawunmi Thorpe, an Ogun State indigene, who died a homeless man, may never be known. naijagists.com

To passersby and residents, who saw Thorpe everyday in the rubbish dump beside the rail line at Fagba Bus Stop in Ifako-Ijaiye Local Government Area of Lagos State, he was a deranged man. But what many people did not know was that…

Thorpe had a Bachelor and Master’s degrees in Mass Communication and a PhD in English Language. All these information came to light when the Punch got information that the “mad man” who spoke impeccable English had died about 5pm Wednesday last week.

It took two ‘good Samaritans’, Mr. Larry Happiday and Mr. Dele Olawale, who had interest in Thorpe’s case before he died, to ensure that his body did not rot on the same rubbish dump he used as home.

When the two men were asked how they knew Thorpe and their efforts at helping him before he died, Happiday said he first met the deceased about a year ago.

He said, “I began noticing him around Fagba about a year ago because I live around Fagba. One day in March, he approached me and I thought he was going to ask for money. But he did not.

“He told me it was his 58th birthday and begged me to buy him a Bible and a book, ‘The Power of Positive Thinking’.

“The first thing that struck me about him was that he wasn’t the average destitute. He spoke good English with good diction.”

Happiday said he became interested in Thorpe’s case and would stop once in a while to check up on him at the spot, adding that he later bought him the book and the Bible.

According to Happiday, he became a sort of friend to Thorpe, stopping by once in a while to give him food and ask about his background.

“He told me he was from a rich family in Abeokuta and that his father was a former Ambassador to Ethiopia. He also said he had his first and second degrees in Mass Communication and PhD in English language. But he did not say which year he got them or from which institution. However, when I stopped by one day, I met Pastor Olawale with him,” Happiday said.

On his part, Mr Olawale explained that he first met Thorpe about four years ago. According to him too, the homeless man always asked him for a Bible.

The pastor explained that he got interested in Thorpe’s case when the man approached him one day while passing through the rail line at Fagba. He said he always asked Thorpe about his family and who could be contacted to take him away from the place.

He said, “I felt the place was not safe and he could still become something great if he got somebody to take care of him. He brought out a jotter containing phone numbers of some of his friends and relatives and he gave me that of a man he referred to as his uncle and head of the family – Bode Thorpe.

“I wanted to know why nobody had come to his rescue. In one of our conversations, he told me he was once a journalist. He said his father later established a community bank and made him the manager.”

According to Olawale, Thorpe told him there was a case of financial impropriety in the bank, resulting in his being jailed. Thorpe was said to have explained that after he left jail, he had a road accident that affected his right leg.

“Since that day, Thorpe said his life took a turn for the worse. He said his family disowned him. I visited him regularly and gave him food when I could. I called the phone numbers of many of the family members he gave me, but most of them did not show any interest in him,” Olawale said.

It was gathered that Thorpe has children and that his mother is a retired army officer.(Credit: Punch)