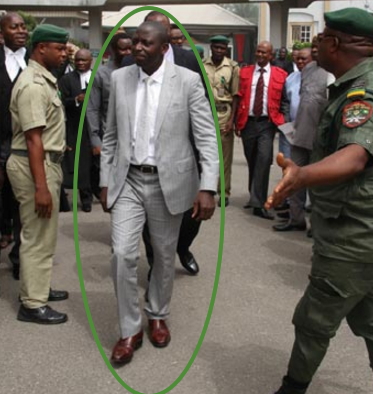 There was confusion and commotion Monday as a detachment of Mobile Policemen accompanied by Economic and Financial Crimes Commission, EFCC, operatives stormed the premises of Federal High Court in Lagos, southwest Nigeria, and whisked away the former Director General of Nigeria Maritime Administration and Safety Agency (NIMASA) Patrick Ziakede Akpobolokemi.

The embattled former NIMASA boss who had been arraigned before two different courts of the Federal High Court on charges of stealing and conversion of money running into billions of naira was just coming from a court presided over by Justice Ibrahim Buba, where one the cases was adjourned till 18 January, 2016, for trial was about to enter his car outside the court when he was accosted by two EFCC operatives and two armed Mobile Policemen. 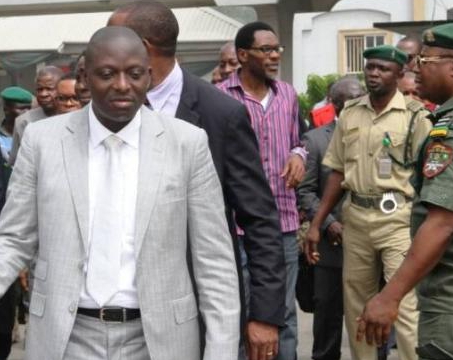 The encounter degenerated into scuffle when he tried to resist arrest and the two armed policemen called for reinforcement. Four other Mobile Policemen who were lurking around joined their colleagues and overpower him.

They forcefully bundled him into a waiting kombi bus and whisked him away to the bewilderment of his lawyers who helplessly watched the whole drama.
Justice Ibrahim Buba had adjourned till 18 January for the trial of the accused person to commence, after Dr Joseph Nwobike (SAN) leading seven other lawyers, on behalf of other counsel appearing for three other accused persons, urged the court to adjourn the case to enable them study the case file since they had just been briefed.

The EFCC had also just served them additional proof of evidence in the open court on Monday. The EFCC prosecutor Mr Festus Keyamo did not raise any objection.
In the first case Akpobolokemi was arraigned with three other accused persons and three companies over an alleged stealing and conversion of N2,659,457,666. In a 22-count criminal charge number FHC/L/511C/15 signed and filed before the court by EFCC prosecutor Barrister Festus Keyamo, it was alleged that Patrick Ziakede Akpobolokemi, Captain Ezekiel Bala Agaba, Ekene Nwakuche, and Governor Amechee Juan with intent to defraud conspired together to induce the Federal Government of Nigeria to approve and deliver to NIMASA the sum of N2,659,457,666.60 under the false pretence that the said sum represented the cost for the implementation of the International Ship and Port Security(ISPS) code in Nigeria’s Ports.

They thereby committed an offence contrary to and punishable under sections 8(a) 1(3) of the Advance Fee Fraud and other Fraud Related Offences Act, 2006.
All the accused persons were also alleged to have conspired with these three companies: BLOCK AND STONZ LTD, KENZO LOGISTICS LIMITED and AL-KENZO LOGISTICS LTD, to commit the offence thereby committed an offence contrary to section 18(a) of the Money Laundering Act 2012 and punishable under section 15(3) of the same act.

All the accused persons pleaded not guilty. Consequently, Nwobike leading seven other lawyers while arguing their bail application urged the court to admit them to bail on the ground that they are presumed innocent until they are found guilty,
They were admitted to bail in the sum of N50 million with one surety who must possess landed property worth N50 million and the accused must deposit their international passports with the court as they are also banned from travelling outside the country.

In a 30-count criminal charge number FHC/L/496C/15 signed and filed before the court by EFCC prosecuting counsel Barrister Festus Keyamo, it was alleged that Akpobolokemi and other co-accused mentioned earlier and Grace Z. Subai alleged to be at large, between 20 December 2013 and 28 May 2015, were alleged to have conspired together to steal and convert N3,407,549,000 property of NIMASA thereby committed an offence contrary to and punishable under sections 15(1),15(3) and 18(a) of the Money Laundering Act of 2012 as amended.

All the accused pleaded not guilty. Thereafter, Nwobike leading nine other lawyers, adopted his submission while arguing his bail application filed before the court. He applied for bail in liberal terms on the ground that the accused are presumed innocent until proven guilty.

In addition, Nwobike submitted further that the accused who are on EFCC administrative bail came from their respective homes and would not jump bail if granted bail.
The EFCC prosecutor, Mr Oyedepo Rotimi, while not opposing the bail of the fourth to eight accused persons, opposed the bail of Akpobolokemi on the ground that when he was granted administrative bail by the EFCC, he jumped bail, and failed to come back to the commission until his sureties were arrested and detained.

In his ruling, the presiding Judge Saliu Saidu, admitted Apolobokemi to bail in the sum of N100 million with two sureties, one of the sureties who must be his relation must be a landed property owner in either Ikoyi, Victoria Island, or Lekki.

The accused former NIMASA boss must also deposit his international passport with the court, while the other accused persons were granted bail in the sum of #50million with two sureties,one of the sureties must be a landed property owner in either Ikoyi or Victoria island. All the documents of the landed property are to be verify by the court Registrar.

Thereafter Justice Saidu adjourned till 29th of January,2016 when the trial of the accused persons will commence.

Continue Reading
You may also like...
Related Topics:arrest, efcc, nimasa