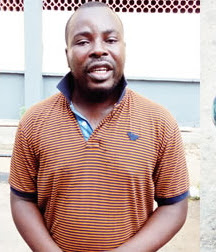 November 28, 2016 – Lagos Driver Promoted To Accountant Arrested For Faking His Own Kidnap, Stealing $50,000 From Employer

An accountant with Eterna Plc, a lubricant firm in Ikoyi Lagos has been arrested for allegedly stealing $50,000 belonging to his employer.

According to police investigation, 30-year-old Femi Akinola was sent to withdraw the sum from UBA in Marina on Thursday the 17th of November, however on getting back to the office, he told his boss that he was kidnapped and that his abductor dispossessed him of the money and his phones

After his arrest, he told police officials that he stripped himself and threw his phones into a river along the way to perfect the kidnap ploy.

Police have been able to recover $30,000 hidden inside a concrete block at a primary school in Bariga Lagos while efforts are ongoing to recover the rest of the money.

Here is the suspect’s confession: