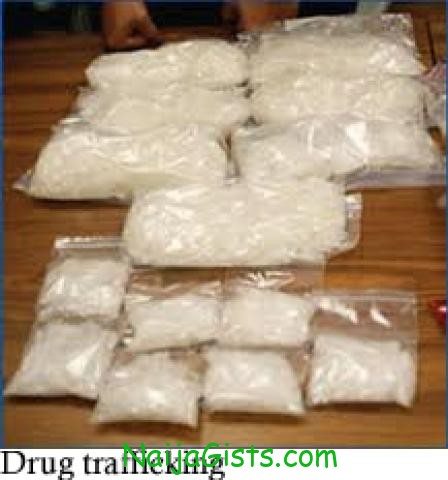 Suspected drug traffickers who were apprehended by officers of the National Drug Law Enforcement Agency (NDLEA),
vomited some wraps of drugs shortly after his arrest at the airport.

The suspect was one of the two Malaysia-bound passengers who tested positive for drug ingestion at the Murtala Mohammed International Airport (MMIA), Lagos.

After they tested positive for drugs, officers were taking them for documentation when Ebuka vomited two wraps of drugs he ingested.

While under observation, he excreted 45 wraps of methamphetamine weighing 800 grammes.

Charles, on his part, excreted a total of 88 wraps of methamphetamine weighing 1.125kg.

Ebuka who sells generator parts at Trade Fair complex, Ojo, Lagos told investigators that he wanted to increase his capital.

“I sell generator parts at Trade Fair Complex Ojo, Lagos. My business is not growing and I have no helper so I decided to increase my capital through drug smuggling,” he said.

“I actually begged to be recruited as a trafficker. Initially they doubted my ability to smuggle the drugs but when I insisted they then considered me.

“This is my first time and they promised to pay me 4,000 dollars. The drug was causing me pain in my stomach and I could not control myself. I vomited some of the drugs.”

Charles, who claimed he was studying English in Malaysia, attributed his involvement in drug trafficking to financial hardship. naijagists.com

“I am a student studying English language in Malaysia but I lost my uncle that had been sponsoring me,” he said.

“My involvement was to help finance my education. Please help me. This is my first time and it is due to circumstances beyond my control.”

The Chairman/Chief Executive of the Agency, Ahmadu Giade said the Agency will continue to prevent drug trafficking and protect the image of the country.

“Drug trafficking attracts death penalty in Malaysia. We are happy to have stopped these suspects. Their action is simply suicidal and the trend is becoming worrisome,” Giade said.

“However, we shall intensify efforts in preventing cases of drug trafficking in the country.”

The suspects will be charged to court soon.

What a wrong choice on their part.