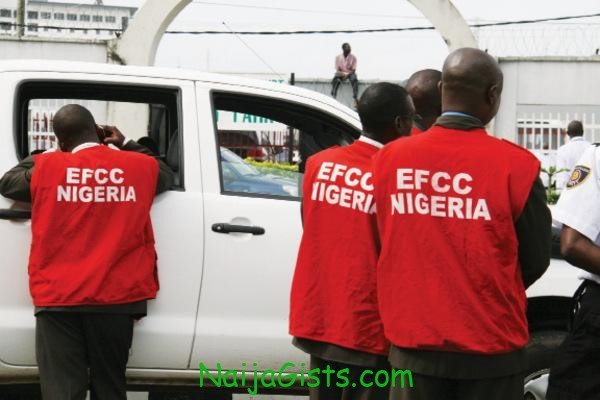 The custody of EFCC while Farida Waziri was at the of affairs turned to a baby making factory when one of the officials of the commission (name withheld) allegedly impregnated a detainee and covered it up from the glare of the public.

According to a petition written to the Attorney-General of the Federation and Minister of Justice, Mohammed Adoke by one Eprahim Emeka Ugwuonye of 310 Watkins Pond Boulevard, Rockville MD, dated November 16 2011, disclosed that a woman was arrested sometime in July 2009 by operatives of EFCC and detained at the Okotie-Eboh, Lagos office of the agency.

The petitioner stated that while she was in detention, the official of the agency was having carnal knowledge of the woman and by the end of November of that year, she was pregnant and informed the authority about the shameful attitude of the official. But no punitive measure was taken against the EFCC official. Instead, to cover the shame that it was going to bring to the agency, the woman was charged to court and was made to be remanded at the Kirikiri Prisons. Excerpts of the petition are reproduced hereunder: naijagists.com

Mohammed Adoke, SAN, The Honorable Attorney-General and Minister of Justice.

Petition against Mrs. Farida Waziri and the Economic and Financial Crimes Commission (EFCC): The Dark Secrets of the EFCC.

I hereby bring to your attention a crime, and cover up committed by the officials of the EFCC with the active connivance of the Chairman of the EFCC, and I request that the incident, and series of events surrounding it be investigated by your office.

There was a woman who was arrested by the EFCC around July 2009, and was detained at the Okotie-Eboh detention facility. While in detention in the custody of the EFCC, the woman was impregnated by an official of the EFCC. By the end of November and early December of 2009, the lady reported the incident to the officials of the EFCC. She disclosed the identity of the operative responsible for the pregnancy. She revealed also the details of how she got pregnant. According to her revelations, the EFCC official would come to the cell each night and would take her to the EFCC offices where he would have unprotected sex with her against her consent. After about two months of this pattern of activity, the lady got pregnant while still in custody. EFCC conducted test on her and determined that she was indeed pregnant and that she got pregnant while in its custody.

Once the woman was remanded at Kirikiri, the EFCC successfully covered up the incident. The officer involved is still working in the EFCC. No disciplinary action was taken against the officer. The officer in question is known. He has injury on one eye and wears glasses. The reason Mrs. Waziri and her top officers chose to cover up the incident was because they felt it would attract adverse publicity to the EFCC under her watch. She would rather continue with the false and well massaged image of a well-run and well-functioning organization.

Dear Sir, the issues involved in the case of this woman are of fundamental significance for your duties as the chief law officer of this country. It is your duty to ensure that all agencies of Government comply with the law and constitution. And where there is credible or investigatable theory
of crime or a credible complaint of a systemic violation of the constitution or an official cover-up, you have the duty to act.

In this instance, even though I am not able to provide you yet the name of either the detainee in question or the particular EFCC officer involved, you do have sufficient information to request a reaction from the EFCC. Such information, now at your disposal will enable you to ask the
following questions:

1] Looking at the list of EFCC detainees between July and December of 2009, was there an inmate that got pregnant in custody? The mere fact that a detainee got pregnant while in custody is enough to trigger an investigation.

2] There is an EFCC detective with bad eye, and who wears glasses. He worked in, or had continued access to the Okotie-Eboh cell between July and December of 2009.

3] There was a pregnant detainee who spent five months in detention at Okotie-Eboh cell, who got charged in December 2009, and was remanded in Kirikiri prison after it was known that she was pregnant.

4] Please, ask for the list of detainees who tested positive for pregnancy during the time they were in the custody of the EFCC.

The Honourable Attorney-General, I understand that this petition raises grave issues, and should have been disclosed with specificity
the identities of the victim and the officer that perpetrated the crime of rape. But this incident involves a massive cover-up by the EFCC. In that
situation, it is through hard work and diligent effort that so much information as I have disclosed herein could be possible. It will require an officer in your position to conduct the kind of inquiries that could bring out the facts that have been so carefully suppressed by the EFCC officials.

The significance of the incident in question must not be lost upon your office. As is well known in law enforcement circles, cover-up
and obstruction of justice are worse than the substantive violation of the law.
If the EFCC covered up a case in which its officer raped and impregnated a detainee in the custody of EFCC, there ought to be an investigation and appropriate measures or prosecution.

I realize that your office has made several efforts to regulate the activities of the EFCC. Your testimonies during your confirmation
hearing by the Senate eloquently explained the frustration you have suffered in your dealings with EFCC under the leadership of Mrs. Waziri. However the situation may be, you remain the Attorney-General of Nigeria. You have certain duties and responsibilities that go with your office. Do not sweep this petition under the carpet.