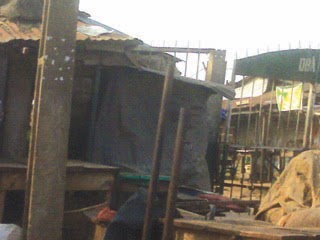 Police officials have arrested 9 suspects in connection with a violent torture case that happened at Ejigbo market in Lagos State Nigeria in February 2013.

The arrest was made at Oba Murufu Ojoola’s palace in Lagos state Nigeria over the weekend.

One of the tortured women was reported dead after the incident.

The market has also been shut and the traders were asked to vacate on Saturday pending the conclusion of investigation of the crime.

According to police report, the traditional ruler of Ejigbo, Oba Ojoola had been under pressure to produce those involved in the crime after the barbaric incident was made public late last year following the uploading of the incident on the internet. The ordeal of the women sparked widespread outrage, with women’s groups calling for probe of the perpetrators of the incident.

According to the police, the suspects have been detained at Ejigbo Police Division and would be facing murder charge because it was alleged that one of the victims died as a result of the torture.

The police source also said that the suspects would be transferred to SCID, Panti, Yaba, Lagos for further investigation.

PM Lagos learnt that the arrest was carried out by the new Ejigbo DPO, Aliko Dankoli, who led the raid that lasted several hours following an order of the Lagos State Commissioner of Police, Umar Manko to arrest the perpetrators of the act.

Meanwhile, when our correspondent visited the closed market, some traders were seen entering the market through the back gate. They were later seen  leaving the market with  their goods.

Some of the traders who spoke to P.M.NEWS said they had to leave the market with their goods because they do not know when the market would be open because of the seriousness of the matter.

They also confirmed that the market leaders have stopped coming to the market as they were afraid of being arrested by the police.

Oba Morufu Ojoola had earlier been reported to have gone into hiding following attempts by the police to arrest him in connection with the torture of the two women.

The victims, a mother and her step-daughter, were stripped, tortured and pepper was poured into their private parts for allegedly stealing pepper in the market early last year.

The state Commissioner of Police ordered the arrest of the perpetrators and invited Oba Ojoola to his office for explanation about the incident which occurred in his domain.

According to sources, the Oba, however, failed to report at the commissioner’s office at Ikeja, Lagos.

The state House of Assembly is also probing the dastardly act.