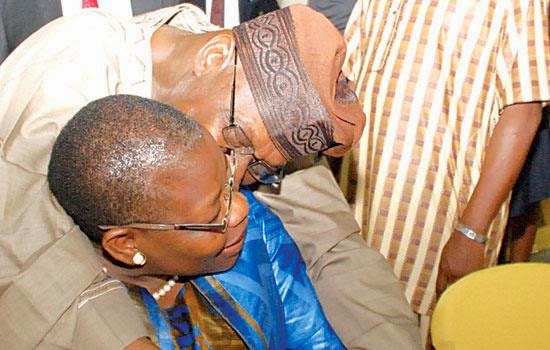 Some photos of ex-president Olusegun Obasanjo and former Minister of education, Oby Ezekwesili went viral yesterday, a day after OBJ launched his controversial book in Lagos.

Many Nigerians and politicians are going after them for showing affection in public.

Now here is our take on this, these elderly people seem to care about each other.

Though we  are not speculating that they’re dating, but it is obvious they have a strong connection somewhere.

Recall that Oby served as a minister in Obasanjo’s administration, so they knew each other for a very long time.

It looks like Obasanjo loves madam Oby but that married woman is well respected, she can’t stoop so low to such demand. Make Obasanjo no spoil madam’s image o.

Do you see anything wrong with these photos???