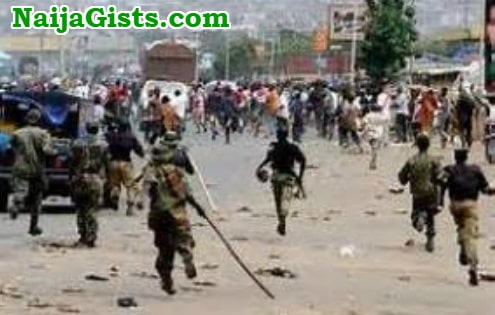 Let’s be honest with ourselves, in our country election is warfare! It is not even the equivalent of war but real war, period! It is a savage, mortal combat, a blood spot where gladiators and their loyal warriors are armed to the teeth with physical weapons…guns, machetes, knives, even cudgels and blunt weapons to bludgeon their opponents, not forgetting the spiritual and metaphysical ones (charms, amulets, incantations) which are freely employed alongside various battle tactics, all for the accomplishment of the ultimate “strategic objective” of capturing political power.

That’s right, capturing power…not winning it in a fair contest…is the essence of political contestation in our country. Anybody who believes the contrary is either being plainly mischievous or is living in a fool’s paradise, an Orwellian sugar-candy mountain of his own creation, so unreal to those of us who live here and witness the sheer murderous violence that elections have become.

The evidences of elections as warfare are there on the ground and in plain view for all to see. I couldn’t help but laugh aloud when the ambassador of one of the major Western nations in Abuja declared to Nigerians that election is not warfare. I must say that he was neither being mischievous in that statement nor can anyone accuse him of living in a fool’s paradise, after all elections are always peaceful in his own country. He was merely being diplomatic, i.e., saying the nastiest things in the nicest way as diplomats are wont to do.

At another level, the statement could be seen as exhortatory, urging Nigerians to see electioneering not as a savage contest but rather as a civilized method for the mass of the people to participate in deciding who governs their country.

In a purely technical sense, the 2019 general elections may be ranked as the best so far, in terms of its meticulous organization and implementation, though not without considerable hiccups, shortcomings and attendant violence.

The clever deployment of modern ICT tools throughout the entire electioneering process, from voter registration, voter sensitization, through to the actual voting, collation, recording, announcement and display of the results, is unrivalled in the annals of election administration in Nigeria. Without question, it must also rank as one of the most violent and by far the most disrupted elections in recent memory.

The numerous incidences of murder of politicians, security personnel, party agents, electoral officials and even ordinary Nigerians; the forcible kidnapping of politicians, INEC staff and security agents; the burning down of INEC offices and facilities in different places before and during the voting and collation exercises; the massive threats of violence against, harassment and physical intimidation, of regular INEC and ad hoc staff, which forced many collation officials to hurriedly announce results under duress while looking down the barrel of guns wielded by paid political thugs, are so mind-boggling they shouldn’t be spoken of in the 21st century. If judged by the sheer naked display of banditry and hooliganism that marred the voting and collation processes in many parts of the country, there is no doubt the 2019 will rank as the most uncivil.

Elections have always been a zero-sum contest since independence when Nigerians themselves started conducting it. The national general elections of 1964 and the Western Region elections of October 1965 were so badly riddled with irregularities that caused Nigeria to spin out of control until the military struck in January 1966 to put an end to a democracy that had gone totally berserk. Elections since then have been marred by contrived irregularities, violence, mayhem, kidnapping, murder and arson because of the incurable desperation of politicians for office.

President Olusegun Obasanjo in a Freudian slip in 2007 famously warned that the general elections of that year were going to be “a do-or-die affair”. And they truly were as he went on to superintend the greatest electoral robbery that even its principal beneficiary, President Umaru Musa Yar’Adua, had to openly own up to the grand heist.

What is it that makes electoral contests that are conducted so easily and peacefully in other climes such a zero-sum contest in Nigeria? It is simple: political office gives unrestricted access to power and unearned wealth for self, family and cronies. The late Nigerian political scientist, Claude Ake, in his book, Democracy and Development in Africa, reflected the reality that holding power is everything as it guarantees unrestricted access to unearned wealth from the common patrimony.

According to him, it is also the main guarantor to personal security and well-being, and that those outside the power loop cannot afford to take both their personal safety and even their entrepreneurial activities for granted. For the power elite, entrepreneurial engagement is a distraction since wealth can be made easily from the national treasury. There is so much money to be made just by holding a position of power; hence great premium is placed on acquisition and retention of state power!

It is not surprising that because such huge premium is placed on acquisition and retention of state power, “political competition tends to assume the character of warfare”. The struggle for power is often so intense that every other activity pales into insignificance by comparison. For Nigerian politicians and office seekers, the maxim is: winning isn’t everything, it’s the only thing! This desperation for electoral victory is certainly at the root of the series of inconclusive elections, as well as the associated crimes and criminality.

Something urgently needs to be done to make elections less violent and less traumatic for Nigerians. It is time for INEC to think outside the box and design an entirely novel, innovative, much more efficient and less costly electoral administration for the country. And this should not be difficult, given the calibre of scholars and other experienced Nigerians in INEC.

Ekiti State governor, Dr. Kayode Fayemi after casting his vote for the March 9 state House of Assembly elections, advised INEC to devise a new system that will allow all elections to be held in one day through the use of electronic voting that will make the exercise less stressful, save time and reduce needless paper work and logistics. INEC should take this suggestion very seriously.

The federal government and the National Assembly should get on board as a matter of urgency. It is not beyond INEC to design such a template that will be effective and efficient. It’s time we gave it a try. It is not expected to be perfect at first try, but we will continue to improve on it until such a time electronic voting would be so perfected and become a routine activity. Nigerians must be saved from the evil machinations of political desperadoes and protected from the sheer drudgery and trauma that elections have become.

It’s time to do something new. We are in the digital age and cannot escape it. INEC must ignore the naysayers who argue that we are not ripe or sophisticated enough for e-voting. The journey of a thousand miles must begin with the first tentative steps away from home. Let INEC not be shy of taking these first steps.