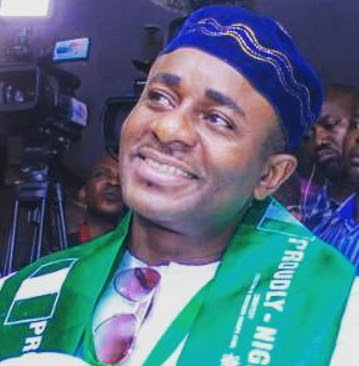 Nollywood actor Emeka Ike has finally revealed what made him to reconcile with ex-AGN President Ibinabo Fiberesima and how some selfish Nollywood filmmakers shared the whopping N3billion grant approved by former President Goodluck Ebele Jonathan among themselves.

He said, “There has to be peace before we can have an election and chart a course for the association. I didn’t have anything personal against Ibinabo; it was all about legal issues.

But if we must move forward, we must resolve all the issues, and that is what happened recently. I and Ibinabo have decided to put an end to the crisis and let things go on the way it should be.”

Reacting to the claim by Emeka Rollas that he is the new president of the AGN, Emeka said, “It is unfortunate that while we are trying to move the association forward, there are some people with other sinister interests and they would be exposed soon.

We are just waiting for them to make a public appearance and identify themselves as leaders of AGN, then we would show them what legality means. We would be revealing our next course of action soon, but right now, all I can say is that I and Ibinabo have come together.”

“There are people who are trying to usurp and hijack the industry and they would do anything to make sure that there is no peace. So now that Ibinabo and I have come together, they are trying to put spanner in the works. Who were the people that got the N3bn that was shared in the industry recently? I didn’t send representatives to any meeting and Ibinabo only sent seven people. Yet, nobody is asking questions.

That should tell you that someone is playing games and the Economic and Financial Crimes Commission needs to be involved. If you want to know who shared the money, go to the Bank of Industry and ask them who recommended the people that got the money.

How can money be coming into an industry, yet the relevant associations are not getting anything; rather the money is going to certain individuals.”

Emeka also stated that his acting days are not over yet. He said, “I still featured in some movies in Asaba recently.”

On what plans the AGN has for recently deceased actor, Obi Madubogwu, Ike said, “From which money are we going to do anything for him? There is nowhere we make money from and that’s because some people somewhere are sharing the money that is supposed to be for all actors. Anyway, we pray for the repose of his soul and we would do the little we can to support his family.

The Minister for Information and Culture, Lai Mohammed, has refused to work with us. His reason is that there is crisis between my faction and that of Ibinabo but he has never called us together for a meeting to find out the true situation of things.

We invite him to our seminars and conferences but he doesn’t attend, and he doesn’t invite us to his programmes either.”