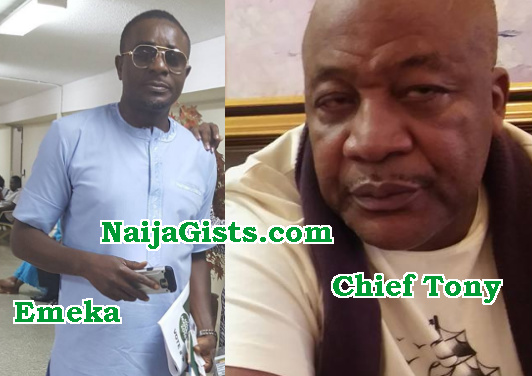 Today, the 2nd day of December 2016 marks the 8th day since the ugly incident occurred at Febson Hotel Wuse zone 4 Abuja, where Emeka Ike a member of the Actors Guild of Nigeria (AGN) Lagos state chapter insulted and assaulted a 60years old Elder and veteran actor of the AGN Abuja Chapter in the person of Chief Tony Nworisa without any justifiable provocation.

On the 24th of November, 2016 shortly after a successful monthly Meeting of the AGN Abuja Chapter at Asset Gardens Garki Area 8, some members of the chapter were invited for a casting at Febson Hotel, Chief Tony Nworisa was one of them. After arriving Febson Hotel at about a few minutes after 8 pm, Chief Tony in the company of other state Elders and members inclusive of Chief Bruno Iwuoha, Mr. Tony Ezemadu, BJ, Rikki Akpokaigbo, Holy Steve and others sat at the pool side waiting for scripts when Chief Tony, having sighted Emeka Ike in the premises, called him in good faith to exchange pleasantries.

After the pleasantries Emeka Ike went into inviting Chief Bruno Iwuoha to an event at Sheraton Hotels which was to hold on the 25th November 2016. While encouraging them to be in attendance, Emeka Ike began to rain down insults on the entire Igbo people, boldly stating that he regrets his kinship to the Igbo Race and would rather that he originated from another part of Nigeria.

As an Igbo Chief, and custodian of the Igbo culture and tradition, Chief Tony Nworisa cautioned Emeka Ike by saying “Emeka, why are you insulting the Igbo race” This was all that chief Tony needed to do/say to provoke an unprecedented outburst of rage, disregard and disrespect from Emeka Ike, querying the Chief for calling him by his name “Emeka” instead of by his self-acclaimed titles Chief Emeka or AGN President.

This is no time escalated into demeaning insults where Emeka Ike called Chief Tony a fool to his face in the midst of a gathering crowd and threatened to drawn the him in the swimming pool and other unbearable threats as were confirmed by eye witnesses. When the Chief remained quiet, trying to assimilate what had just happened and Emeka seemed to be walking away, suddenly, Emeka returned to him (Chief Tony) with his five fingers spread on the Chiefs face in a manner that says ‘WAKA’, pushing Chief Tony before walking away.

Just as the Chief gathered himself together and approached Emeka to demand an explanation, Emeka unleashed his tugs to manhandle Chief Tony.

In the face of this development, having investigated and found the story to be true, we the Executive Council and members of the AGN Abuja Chapter wish to express our disappointment in the actions of Mr. Emeka Ike who happened to be a Senior colleague whom most of us would want to emulate.

As Actors, we consider ourselves role models, molders and sharpers of our society, modeling through our work of art, what society should be and therefore will not condone any negative representation of our noble profession as Emeka Ike has made a habit; considering the fact that this is not his first public violent attack.

Also, as Africans and as Nigerians, we are known the world over to be respecters of culture, traditional institutions, Elders and Chief Tony Nowrisa to whom this act of this disrespect was matted upon is not only an Elder, but also a custodian of the Igbo tradition as a Chief.

We in the Abuja chapter of AGN consider Emeka’s actions as not only insulting to our Elder and the entire chapter, but as abominable, preposterous and unheard of, even as a people. We hereby demand from Emeka Ike a public apology to our ever green Elder Chief Tony, the Executive Council and membership of the Abuja chapter and the entire AGN Nationwide for this gross misconduct which threatens to portray our noble guild in a negative light.

It is no more news today that Emeka Ike has over the years been impersonating and parading himself as the AGN National President even where there is no record of him contesting and winning any elections whether in the past or in the present, nor has there been any court order appointing or nominating him as the President or a care taker of AGN.

It has also come to our knowledge from this incidence, that Emeka Ike now moves about with a wagon of thugs whom he has promised to unleash and crush anyone who tries to stand in his way. This has been his threats to AGN members, and he makes his boast in the protection he claims to enjoy from the present APC administration

It is in view of these, that we hereby publicly declare Emeka Ike a threat to the peace and security of the AGN Abuja Chapter and indeed the National, and his attack on Chief Tony, a man of high repute and caliber, leaves little to be imagined of what he could do to a helpless young fellow.

We hereby bring to the notice and call upon the attention of the Nigerian Police Force, FCT Command, the State CID and other Security Agencies to be mindful of Emeka Ike and his thugs within and around the FCT as no one can predict what he is capable of in his quest to become AGN president so as to enable our members go about their lives without fear of a dear colleague called Emeka Ike.

We also wish to caution the general public especially the respected APC ruling party, to be mindful of Emeka Ike and how he goes about in the name of his APC godfathers as his claims his representation of the APC led Administration. The AGN Abuja chapter hereby formally disassociates herself from his person, his activities and any person, event or brand that chooses to identify itself with Emeka Ike. We will view anyone associating with Emeka Ike as President of AGN as one who do not want peace in AGN.

We also wish to declare that Emeka Ike has not contested and won any elections that we in the Abuja Chapter are aware of as stipulated in the AGN constitution, and hence is only impersonating as the President of AGN. The guild remains at status-quo as ordered by the court as we await our national elections soon. For now, we demand of Emeka Ike to conduct himself with decorum and self-regard and begin making constructive plans to win the next national election just like any well-meaning leader would do.

Since Emeka Ike is still fighting to become the President of the Guild, one can only wonder if this is a set up to further tarnish his image.

We hope to hear Emeka Ike’s side of the story and eyewitnesses account of the assault soon.