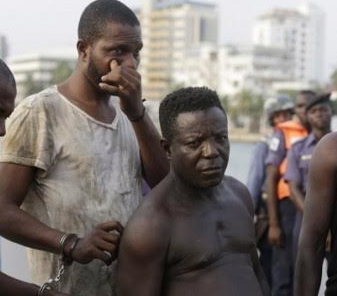 A victim of the attack, the suspect’s uncle simply identified as Daniel reportedly died of dagger attack while he was trying to stop him.

The suspect carried out the fatal attack less than 8 hours after he was brought back from Ghana where he had gone in search of greener pastures.

Here is what an eyewitness in the affected community said:

The remains of the deceased had been deposited at a morgue in Oghara while the injured are currently receiving treatment at Oghara Teaching Hospital in Ethiope West LGA of Delta state.

Police officials have been stationed at the house of the suspect’s father to prevent reprisal attack from the members of the community.

According to a family source, the suspect who travelled to Ghana in August 2016 was deranged as a result of heavy hard drug usage.

The source who spoke on the ground of anonymity said the father of the boy was called from Nigeria that his son, (Benjamin) was suspected to be insane, and that it was on that basis that the father travelled to Ghana to bring the son.

It was further learnt that upon his return, Benjamin had threatened to take the lives of countless members of the community.

He reportedly carried out the attack hours later.

He has been handed over to police officials at the Divisional Police Station in Orerokpe.