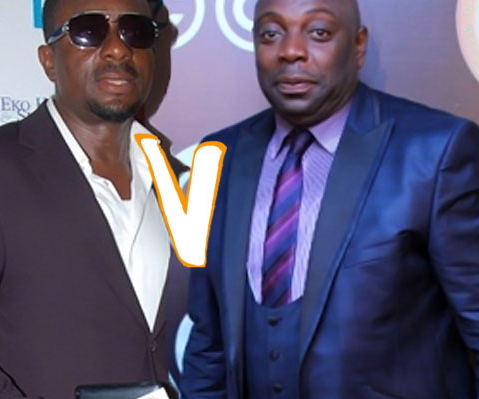 Oct 11, 2015 – Emeka Ike To Segun Arinze: Street Boys Like U Should Be Jailed For Making Ibinabo Fiberesima AGN President Illegally

Former AGN president Segun Arinze was a guest on Rubbin Mind TV show a while back where he talked at length about Emeka Ike and Ibinabo Fiberesima’s power tussle.

This is what Segun Arinze said about Emeka Ike in the interview:

“He should grow up. As far as I am concerned, Ibinabo Fiberesima is the bonafide president. Even in the recent judgement that came out recently telling us to return to the status quo, what does it mean? We were told to go back to the way we were. There was no time Emeka Ike was pronounced the president of AGN. Let him bring out the copy of the judgement and show us if he is man enough. He should wake up and stop embarrassing the guild.”

These words did not go down well with Ike who believes Segun Arinze “is an illiterate who should have been in jail.”

“I heard Segun Arinze was interviewed and he said so many things about me and nobody asked me for my own side. I don’t think it was a balanced report. Segun Arinze did not say anything meaningful, he was just cursing himself. That is not how to handle legal matters. In legal matters, we take things from the law’s point of view. Segun that is talking to the journalist is supposed to be behind bars because he committed a crime that should have sent him to jail. There was an order that he violated by bringing in Ibinabo as the president of the Actors Guild of Nigeria. I have been saying this since. That is why Ibinabo’s tenure was called ‘contentious.’

“Why should we the educated people allow market people to talk? I am a very cerebral person and I don’t deal with men who cannot read and do not understand the legalities of the paper they have in their hand. I cannot be trading words with a common street boy because if you did not go to school, you cannot understand some legal issues. So, he cannot assess the judgement of the court of law.”