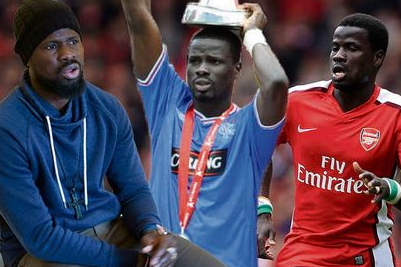 Former Arsenal Defender Emmanuel Eboue is set to appeal the decision by a court in the UK that left him out of his assets.

The 34-year-old athlete was left homeless after a bitter divorce from his estranged wife Aurelie.

According to court documents received by a senior lawyer made available to Eboue by The Mirror UK, the suicidal athlete failed to fill out a Form which sets out all his assets and liabilities.

The court accused him of providing a highly deficient information before the final ruling was made.

Sadly, the court refused to take into consideration the fact that doctors said he was not fit to attend his divorce hearings.

All hospital letters from doctors treating him of depression were submitted in mitigation but they were not considered before the final ruling.

His lawyer said his absence from hearings suggested Eboue was not fit enough to attend. Also that proceedings should have been adjourned as they would have been detrimental to his health and well-being.

The father of three is still seeking fund to file an appeal.