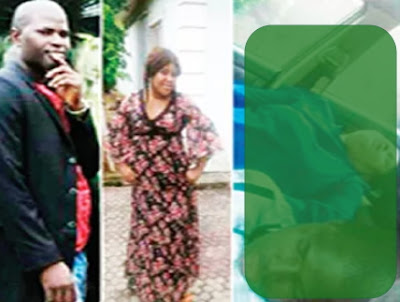 Cheating Husband, Father Of 3 Who Slumped During Service In RCCG Church In Lagos Dies Weeks After Husband Of Ex-Mistress Threatened Him With Juju

A 35-year-old DJ identified as Femi has died after initially escaping death a few weeks ago for reportedly sleeping with a housewife, Mrs. Promise Clement.

A few weeks ago, Promise died along with another man, Lukmon Olowo, believed to be her lover, inside a Toyota Corrola car behind the headquarters of the Area G Police Command, Ogba, Lagos State. They were both partially naked.

Many, however, including Promise’s husband, knew that Femi was having an affair with his wife. After Lukmon’s death, his family members said that he was a responsible married man, who had children and couldn’t have been dating Promise, let alone to be having sex with her inside the car.

When Lukmon died, members of the community where Promise and Lukmon resided claimed that Promise’s husband said that the death was not meant for Lukmon. The husband reportedly said that Femi was the target. Although Femi escaped death then, it was clearly not for long. Femi, a father of three, went to a Redeemed Christian Church of God (RCCG) at Bintu Street, two weeks ago for a service. Femi was said to have collapsed inside the church after he bent down to pick something.

He allegedly grabbed his chest as his face twisted in pains. He was rushed to a private hospital from where he was referred to another hospital. When Femi’s father heard of the incident, he made a beeline for the hospital and asked that his son be discharged. He reportedly told the hospital: “What ails my son is not a medical issue.” He thereafter, took him to a church for prayers. Yesterday, our correspondent was at Femi’s community. A resident, who gave his name as Adebowale, said: “The DJ’s father moved him from the hospital to a church for prayer. After a while, he was returned to the hospital.

“The DJ later died at the hospital. He had since been buried by his family. The church and hospital couldn’t say what was wrong with him. His death came as a shock to every one of us in the community. In fact, since the death of Lukmon, we have not been seeing Femi in the area.” Another resident, who did not want his name in print, said: “I suspected that Femi’s death was caused by Promise’s husband. He must have punished Femi for sleeping with his wife. Promise’s husband had before the incident warned Femi several times to stay away from his wife. In fact, when the incident happened, Femi told some of us that the trap that Lukmon fell into, was meant for him.”

The late Lukmon’s brother, who spoke on condition of anonymity, said: “When the incident happened, Promise’s husband said that he thought it was Femi who died. We were still at Area G Police Command when Prom-ise’s husband brought Femi’s phone out of his late wife’s handbag. It was then we knew that the late Femi was dating Promise.

“Since our brother died, we have not received his autopsy report from the police. When we asked the police for his autopsy, we were told that they had written to the Attorney General of Lagos State for approval. The police said that they were still waiting for the Attorney General’s approval. We have made several efforts to recover Lukmon’s car and other documents from the police, but our efforts have been fruitless.

The circumstance that led to our brother’s death in his car is still a mystery to us, but we have accepted our fate.” Promise and Lukmon were found dead in the man’s Toyota Corolla car parked by the roadside on October 29 at Abisogun Leigh Street, Ogba. The late Lukmon was found on the driver’s side, half naked, with his genitals showing. Promise wore a gown and was dead found reclining in the passenger seat next to Lukmon.

A tricycle rider, who was plying the street, was the first person to notice that the headlights of the Toyota Corolla car were on about 8.30a.m. and had been on for long. Suspecting all might not be well, the rider drew the attention of an executive member of the National Union of Road Transport Workers (NURTW) to the car.

The executive member and the rider went to the scene, peeped into the car and observed that the lovers were motionless. They were said to have immediately alerted the policemen at the Area G Police Command.