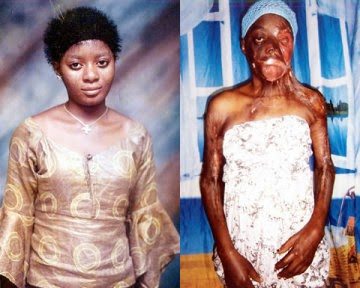 Meet Afusat a young lady who suffered seizure while frying meat for her Aunt seven years ago. She reportedly fell into the boiling oil after an epilepsy attack.

Afusat lost her hubby and newborn baby during the period of her admission at the hospital.

Sadly, her mother has also abandoned her.

The only person left for her is her uncle living at Ijeshatedo Street in Surulere area of Lagos.

During an official visit to her uncle’s resident, the Kwara State indigene said:

“I was helping my aunt to fry some pieces of meats. There was nobody at home that day and I didn’t know when I felt dizzy and unconsciously fell into the hot oil that I was using to fry the meat. People came late to my rescue, by which time the oil had damaged my face, arm and neck.”

“My child died because I could not breastfeed him. After his death, my husband was no longer coming to the hospital to check on me and that gave me some concerns. After several months, we decided to look for him at their family house. I was told that he had died and his family did not want to compound my woes, which was why they left me in the dark.

Right now, I also don’t know where my mother is. She has left me for years and I have lost all contacts with her. The only person I have around me now is my uncle and my old father who visits once in a while. I was selling ready-made clothes, but people were afraid of patronising me because of my looks. This was why I started begging to complement the little my uncle provides.’’

Afusat’s uncle, Ayinla said LASUTH doctors told him they needed money from Lagos State Government to procure tissue for her surgery and without it, they would not be able to do anything.

The Lagos State Government, which promised to foot the bills for a face-lift surgery, was said to have defaulted on its pledge. It was learnt that Afusat now begs for alms in order to raise funds for her surgery.

A doctor at Wockhardts Hospital in Mumbai India said that Afusat surgery and cost of travel is N3 million.

N3M is chicken change to some people. Hope she finds help ontime.