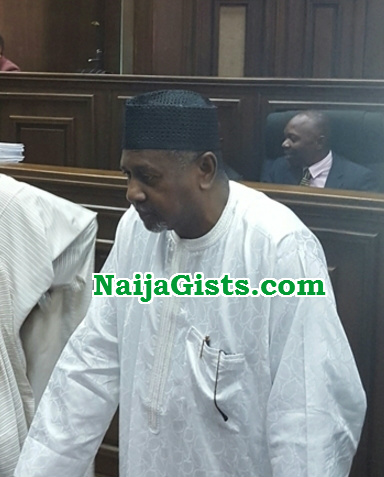 An interim report indicates that about $2billion may have been disbursed for inexplicable reasons.

Dasuki was arrested on Tuesday by the Department of State Services (DSS). He was transferred to the EFCC.

“When Dasuki was brought in, he initially refused to write any statement, alleging that he had been subjected to media trial.

“I think the ex-NSA decided not to open up based on the advice of his lawyers that he should leave everything for the open court.

“The EFCC operatives, however, obliged Dasuki a copy of the statement by a former Director of Finance in the Office of the National Security Adviser (ONSA), Shaibu Salisu in which the latter made some implicating statements.

“Dasuki, who was shocked by Salisu’s confessions, repeatedly asked: ‘You mean Salisu wrote all these! You mean he said these! Give me a pen and paper’.

“Thereafter, Dasuki decided to open a can of worms. He gave a long list of PDP chieftains who collected money from the Office of the NSA.

“He mentioned the names of a former Deputy National Chairman of PDP, ex-governors and ex-ministers and many others.

“As I am talking to you, Dasuki is still writing his statement. The disclosures of the ex-Director of Finance in ONSA have assisted greatly in getting to the bottom of the armsgate.

“So, the investigation is still on. We will certainly arrest more suspects soon.”

There were indications that the anti-graft commission may extend its probe to the seizure of $9million cash by South Africa and quiz all those involved in the botched deal.

An Israeli suspect implicated in the deal is said to have bolted after throwing a lavish party at his Wuse residence.

It was learnt that the EFCC was planning to arraign some of the suspects in court to enable the agency keep the more than 22 suspects being interrogated in custody.

The EFCC is said to be mindful of a situation in which the high-profile suspects will rush to court to seek the enforcement of their fundamental rights and truncate the investigation.

A source, who pleaded not to be named, said many suspects had admitted collecting huge sums of money from the Office of the National Security Adviser (ONSA) when Dasuki was in charge.

“Our investigators have isolated these areas of probe: Were the funds budgeted for? If not, what informed extra-budgetary expenses? How much was actually voted for arms procurement? How were the funds sourced? Who or which agency awarded all the contracts? Who were the contractors? Was there any evidence of delivery of equipment? What will make any Minister to run to ONSA for funds?

“These are the areas our detectives have been mandated to look at.”

On other suspects, the source explained that some of the diverted funds had been traced to a bureau de change owned by a former member of the staff of the ONSA.

“Some Bureau de Change operators were accomplices of many of these suspects in custody. We are tracking every transaction.

“On daily basis, we will keep on inviting more suspects because the syndicate has a complex networking,” the source added.

As at press time last night, Bafarawa, Dokpesi and Yuguda were still battling for bail.

A source said: “We have not released any of them because they are clearing some grey areas.”

Another source in EFCC said the agency would extend its probe to the seizure of the $9.34m cash smuggled into South Africa.

The cash was confiscated by the South Africa from an Israeli arms dealer of Cyprus-based ESD International, who acted on behalf of the Federal Government to procure arms for Nigeria.

Part of the cash was for six “civilian” helicopters from a South African company, Tier One.

The National Prosecuting Authority of South Africa recently received a court permission to return the cash to Nigeria.