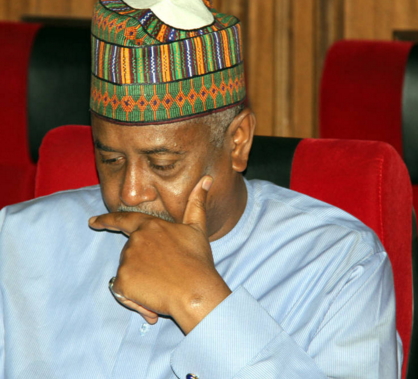 Court papers containing charges against a former National Security Adviser, Sambo Dasuki, and some of his former lieutenants, have provided further details of how Mr. Dasuki allegedly distributed billions of naira meant for arms purchase for the fight against the insurgent Boko Haram group, to politicians, his cronies and family members.

Mr. Dasuki was on Monday arraigned before an Abuja High Court on a 19-count charge of money laundering and breach of public trust.

Those charged alongside Mr. Dasuki were a former director of finance at the office of the NSA, Shuaibu Salisu, as well as an aide to former President Goodluck Jonathan, Waripamowei Dudafa.

The first charge accused Messrs. Dasuki, Salisu and Dudafa (said to be at large) of withdrawing N10 billion in foreign currency equivalent from the account of the NSA with the CBN on November 27, 2014.

The charge says Mr. Dasuki claimed to have distributed the money to PDP presidential primary election delegates – an act the Economic and Financial Crimes Commission said was punishable under section 315 of the penal code Act, Cap 532, Vol. 4 laws of the federation 2004.

Another count says Messrs. Dasuki and Salisu withdrew N2.120 billion from the NSA account with CBN, between January 22 and March 19 and paid same to the account of Daar Investment and Holding Company Limited controlled by Raymond Dokpesi, for the funding of the media activities for the 2015 presidential election campaign of the PDP…

In all, the EFCC said it was accusing Messrs. Dasuki and Salisu of conspiring to do an illegal act through criminal breach of trust by public officers between October 2014 and April 2015 by distributing N13.570 billion belonging to the Federal Government to politicians and cronies.