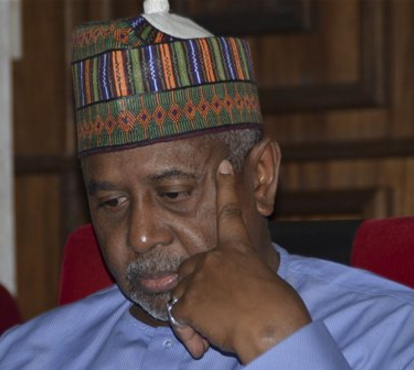 Dasuki, who is standing trial for alleged unlawful possession of fire arms and money-laundering applied for the release of his passport which is in the court’s custody to enable him seek foreign medical attention for his deteriorating health occasioned by prostrate cancer.

Delivering ruling on the application filed by Dasuki, Justice Adeniyi Ademola, who was moved by the situation, granted the former NSA a period of three weeks within which to take care of his health abroad and return to the country.

However, Ademola, who had earlier granted bail to Dasuki on self-recognition, varied the bail condition, which now included a surety who will write an undertaking to produce the accused person on the next adjourned date.

In addition, Justice Ademola also said the surety should be ready to take the position of the accused in case the former NSA refuses to return to the country to answer charges proffered against him by the Federal Government.

In the alternative, Justice Ademola ordered that any of the senior counsel to the accused person could sign an undertaking to take his place before his passport is released.

In the ruling, which lasted over an hour, the judge dismissed the objection of the Federal Government to the request of Dasuki, adding that it was the right of every citizen of Nigeria to choose where to seek medical attention.

He disagreed with the prosecution that the disease could be treated in Nigeria, adding that a letter from the Chief Medical Director of the National Hospital is of no probate value because the letter did not say categorically that the disease can be treated at the hospital.

Justice Ademola dismissed the claims of the prosecution that the three weeks period if granted the accused will delay the trial, adding that from the record of the court, the delay in the trial had always been at the instance of the prosecution.

Continue Reading
You may also like...
Related Topics:Cancer, dasuki, Sambo