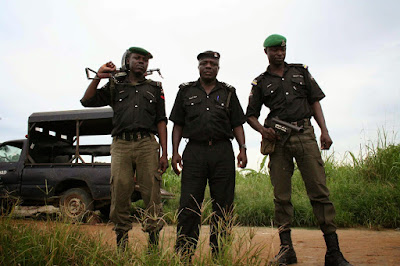 At least 6 people including a motorcyclist and two bank customers have been reportedly killed in a bank robbery attack at Igarra, Akoko-Edo Local Government Area of Edo State.

It was learnt that the robbers stormed the town in two Toyota Sienna buses at about 6pm on Tuesday, where some of them reportedly attacked a police station in the area and killed two policemen.

The others were said to have raided a new generation bank nearby, reportedly destroyed the entry with explosives and carted away an undisclosed sum of money.

The motorcyclist, bank customers and a private security man were also said to have ‎been shot dead in the bank premises.

Two banks, Unity Bank and Keystone Bank, were said to be located in the affected town and situated opposite each other, along Momomodu Ajayi road.

It was, however, not clear which of the banks was attacked and w‎hether money was carted away.

It was also learnt that the the incident h‎as created fear and mourning in the affected community, with some residents lamenting what they described as inadequate security in the area.

However, our correspondent learnt that the robbers were later confronted and one of them killed by vigilance groups, who were said to have mobilised and barricaded their exit route, along Ekpedo-Ekpe road, an area bordering Kogi State.

One of the vehicles said to have been used by the robbers was also reportedly seized by the local security groups.

A leader of a vigilance group in the area, who spoke on condition of anonymity, said many of the robbers escaped with bullet wounds.

The vigilante leader said, “When they started the operation in Igarra, we quickly mobilised our people around the surrounding villages, because they (robbers) came through Lampese to Ososo and down to Igarra and they were also going back through the axis passing through Enwan.

“Our men barricaded their route and there was exchange of gunfire. One of them was killed, another was arrested while many escaped with gunshot wounds. They (vigilante) also impounded one of the vehicles they used.”

But the Edo State Commissioner of Police, Mr. Chris Ezike, who confirmed the incident, told our correspondent on the telephone that ‎one of the suspects had been arrested.

‎Ezike said, “I can also confirm that one of the robbers has been arrested. One died in a gunfire exchange. Eleven AK47 rifles were recovered; I have just finished a press conference in Igarra now.

“We have also recovered N4,452,500 from them. We have recovered 41 AK47 magazines, 39 improvised explosive devices, unexploded and we recovered assorted ammunition.”