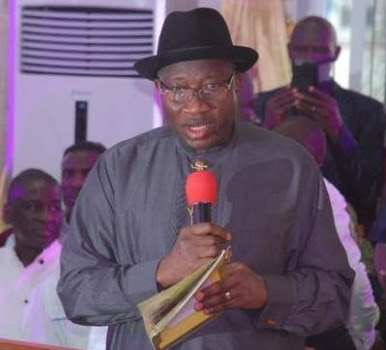 August 12, 2017 – Ex-President Jonathan: With PDP In Power, No Nigerian Will Go Hungry

Ex-Presidnet Jonathan has described the PDP party as a political party loved by God himself.

He said it is not a blasphemy to say that God believes in the former ruling party, often described as the largest political party in Africa.

He said this today at the ongoing non-elective convention of the PDP at the Eagles Square, Abuja.

He called on Nigerians to continue to support and pray for the success of the PDP ahead of the 2019 general elections.

Jonathan said with PDP, no Nigeria will be allowed to go hungry.

Continue Reading
You may also like...
Related Topics:jonathan, pdp