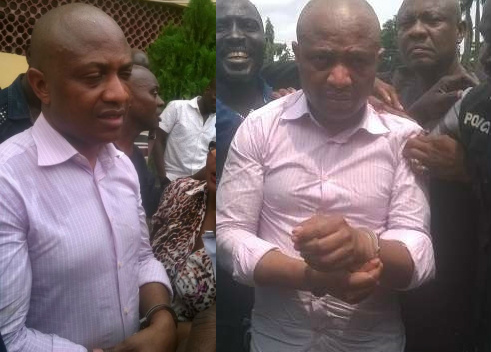 Chukwudi Onuamadike a.k.a Evans, the notorious kidnap gang leader who was arrested in Lagos on Saturday stunned Police Commissioner Fatai Owoseni, during interrogation when he pleaded passionately, in tears, that he should be given a second chance to change to a better person, and become a born-again Christian.

This was just minutes before he was paraded by the Force Public Relations Officer, Moshood Jimoh, with six members of his gang, including a married woman, described as their cook, at Command Headquarters, Ikeja, Lagos over the weekend.

How I became A Kidnapper

“My friend, known as Hunch Man, introduced me into kidnapping and after a few operations during Peter Obi’s administration, we were forced to leave the state and we moved to Edo State. I had some boys from Warri, Delta State, working with me.

“We carried out two big kidnappings where our victims paid N80m and N100million respectively. In 2013, I came to Lagos and I went straight to Festac Town. Before I came to Festac, I had already established contacts with some boys. One of the jobs we did was that of the owner of Young Shall Grow Motors, Chief Vincent Obianodo.

“One guy, known as Emeka, brought the job and we were five that went for that operation — Hunch Man, Nmamdi, Uche, Nwoke and I. I was the one driving and our target was to kill Young Shall Grow’s driver and his police orderly. Hunch Man, Uche Nnamdi and Nwoke were carrying guns and they were the people who fired at Young Shall Grow.

“Hunch Man and Uche were killed during the attack, while Nnamdi, Nwoke and I survived. That operation was my most bloody operation. I didn’t know it was going to turn out that way. I usually don’t know names of people I kidnapped in Festac. But if I see them, I will tell you what I did to them. I have people who gave me information about my victims.

“The pharmacist job is the only one that gave us a problem. The highest ransom I collected was $1million dollars from somebody living in Festac. I keep my victims for months because I want their people to pay the ransom I demanded. I have people cooking for my victims, one of who stays in the house; his name is Uche.

“The other boy is from Aguleri. The boy is a new person, but Uche is old. I usually pay Uche N20million for every operation. I usually make the calls for the ransom. I have six boys in Lagos. My mother does not come to my house and she also knows that I am into crime but she is not in support.

“I bought this house for N130million and I have two houses in Magodo. My house in Ghana is bigger than this. I don’t kill.

Evans has evaded arrest since 2013

Evans has evaded arrest since August, 2013 when he was declared wanted by the Police after the aborted kidnap attempt of the owner of Young Shall Grow Motors’, Chief Vincent Obianodo, at FESTAC, which he masterminded.

He was arrested by the Joint Special Forces, led by the Intelligence Response Team, IRT, the Lagos State Police Command’s Anti-Kidnapping Unit and Technical and Intelligence Unit of the Force.

According to a police source, Evans was the only surviving member of the gang as three of his gang members were killed by the Policeman attached to the victim who later lost his life in the process.

However, Evans later regrouped and continued to carry out more vicious attacks on Lagos residents, and was alleged to have engaged in high-profile kidnap cases in Lagos, and collects his ransom in foreign currencies.

He never negotiated down his ransom, always insisting he would not release his prey until the last kobo was paid.

Addressing newsmen during the parade, the Force Public Relations Officer, Force Headquarters, Abuja, Chief Superintendent of Police, CSP Jimoh Moshood, gave the names of other gang members as 42- year- old Nwosu Chikodi Chukwuma, a.k.a Sudo, who is the third in command to Evans, Suoyo Paul, a.k.a Nwana, 42; Felix Chinemerem, 36, a native of Arochuchukwu, is said to be Evan’s second in command; Ikenna Emeka, 28; Uchechukwu Amadi and Ogechi Amadi who the Police alleged cooked for their victims.

He said: “On the 10th of June, 2017, the police raided the criminal fortress of the suspect, a native of Umudim in Nnewi North Local Government Area of Anambra State who is responsible for the kidnap of notable and prominent Nigerians in Lagos as well as Western, Eastern, South-South and some Northern states.

‘’After an intense gun battle which lasted several hours, his gang was overpowered by the superior fire power of the Joint Special Force and was finally arrested at Magodo Estate, Ikeja area of Lagos.”