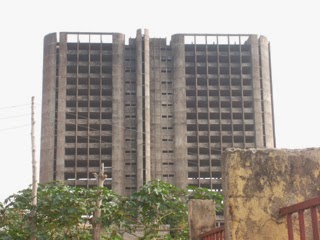 A 20 storey building abandoned by the federal government some years back at Abule Odan-Era, a suburb of Lagos state, southwest Nigeria has been taken over by criminals who rape, rob and sometimes kill their victims.

Residents who spoke to P.M.NEWS lamented that the activities of criminals in the building have been of great concern to them as hardly a night passes without them hearing cries of “please don’t kill me” and at times the residents said they wake up to see corpses of unknown persons.

A resident of the area who identified himself as Mr. Morouf Olu pleaded with the Lagos state government and the Commissioner of Police Mr. Umar Manko to come to the aid of the residents as the activities of the criminals are getting out of hand.

‘’Not long after we saw a male corpse outside the building we saw yet another female corpse again recently. It is getting out of hand and if the police come they will arrest innocent people. The state government and the Commissioner of Police should please come to our aid,’’ Olu pleaded

Another resident Mr. Stanley Ade said he never knew that criminals were using the place as a hideout when his friend helped him to get an accommodation in the area, adding that as soon as his rent expires he will move out of the area.

‘’Honestly speaking I never knew that this place was like this . Every night you hear shouts of ‘please don’t kill me. Please don’t kill me’ I cannot count how many times we have woken up to see corpses of both men and ladies outside the building.’’

When P.M.NEWS went round the building it was observed that there was a mechanic workshop close to the building while some youths were seen playing football. But the story is different at night when the criminals take over.

He said some of the suspects have been charged to court and also promised that the exercise will be sustained.

“I want to appeal to the residents to always report suspicious movement in their environment to the police for prompt action,’’ he said.