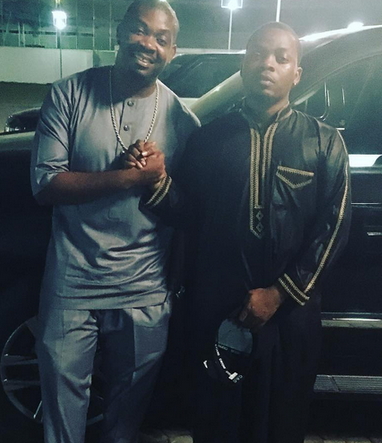 Believe you me, the drama that happened at the headies awards last week was staged for publicity for Don Jazzy’s new act Reekado Banks and  and Olamide’s act Lil Kesh.

According to an insider, the duo had earlier informed the headies awards organizers of their plans to stage a Kanye West stunt in a bid to garner support for Reekado Banks and Lil Kesh.

The source said everything that happened on stage was rehearsed a day before the event.

Meanwhile, the duo have settled their differences in order to redeem the battered image of Olamide

Here is a joint statement the duo released today

“We are very Sorry for the wahala make una no vex oh. It is our responsibility to lead but then again we are only human and we all make mistakes! #WeAreSorryHeadies #WeAreSorryFans #PeaceAndUnity #SMD #YBNL #OneLagos #OneNigeria”