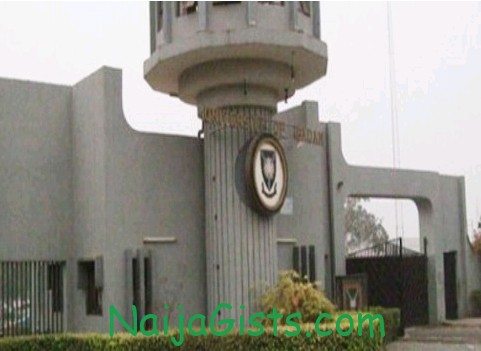 A notorious gang specializing in offering fake admissions for the University Of Ibadan, UI in Oyo State, Nigeria has been arrested. naijagists.com

According to SUN reports, the gang, which comprises both staff and outsiders, was smashed recently when the university’s management discovered that over 63 students gained admissions through a fake process in the 2011/2012 session.

The victims of the admission rackets, according to investigation, were students between 100 and 400 levels before the bubble burst.

One of the victims, a 400 level student, who could not bear the trauma of wasting four years, had been admitted into a psychiatric hospital.

Dasilva said: “We got 19 fake students who were apprehended in my unit within two weeks surveillance. I have over 15,000 students that passed through this unit every session. They are either freshers or bonafide students but they register in my department.

“I stumbled on a lead that ended  up in tracking a fake admission syndicate with considerable network in Lagos, Abeokuta and Ibadan.

“Genuine forms  of the university were smuggled by this serving staff to their syndicate.

Dasilva said the four suspects arrested from outside the university campus are Kabiru Adetunji (a non-teaching staff of Adelagun Memorial Grammar School, Odinjo, Ibadan); Kazeem  Adio Olakunle; Femi Eyiowuawi and the fourth suspect, a former porter in the student affairs division of the university, was dismissed about 11 years ago for a similar offence.

He said: “Two of the suspected fraudsters, Femi Eyiowuawi and Kazeem Olakunle, used their personal accounts to collect money from the affected  63 fake students.

Most of the victims were at 100 level, 200 level, 300 level and 400 level and they had assisted them with fake receipts, got accommodation in the hostels and  course registration forms.

Dasilva said: “One of the 400 level students in social sciences, when he discovered that he was not a genuine student and that he was a victim of the fraudsters whom he assisted in recruiting more students for admission and admitted with fake admission letters, is right now a patient at a psychiatric  hospital.”

He noted that  the suspect, Femi Eyiowuawi, who claimed to be a lecturer at the university, deceived the students and duped them with his syndicate.

Dasilv added: “The fraudster had been on the rackets since 14 years ago inside the UI  and this has led to the dismissal of some staff.

Dasilva stated that the six suspects have been handed over to the State Criminal Investigation Department (SCID), Iyaganku, Ibadan for further investigation.

The Assistant Commissioner of Police, CID, Mrs. Janet Agbede, told Crimewatch that they have three staff of the university who were involved in the fraud and four suspects who were non-staff.

Agbede said: “We have conducted our investigation and we have charged them to court to face trial.

“They are undergoing trial at Ibadan Magistrate’s Court.”

ACP Agbede stated that when Prof. Dasilva petitioned the police through the Commissioner of Police, Joseph Mbu, the CP ordered that “we should re-arrest the suspect, Femi Eyiowuawi, for threatening Prof. Dasilva’s life.

“He has been charged to court before an Ibadan Magistrate’s Court which has granted him bail. He has written an undertaking to the police. The university authorities has said that they don’t want him within their premises again.”

The suspect allegedly confessed that his gangs have been issuing fake admission letters to the new students.

Eyiowuawi said: “It is true that they paid some money into our accounts and we have a syndicate that we involved in  this fraud.”

Speaking on the threat to his life, Prof. Dasilva explained: “The suspect, Eyiowuawi, with two strange men came to my office premises, the General Studies Programme Unit at about 8pm on July 3, 2012. I normally close late at times between 9pm and 10pm but the university security officers on surveillance reported that the suspect arrived at my office at about 6pm that evening.

“Unknown to them, I was away to an international conference on the day of the purported visit. I believed they came with the intention to attack me, perhaps with acid or even kill me understandably because of my involvement in the case,” he said.

Professor Dasilva added: “I have received several text messages, which included “Oga Professor wetin be your own? You no be the only Professor For UI., the students no be your pikins? Why you de cry more than bereaved?

“I was shocked I quickly wrote a petition to the Commissioner of Police, Joseph Mbu and immediately he responded and ordered the re-arrest of  the suspect and this prompted the re-arrest of Eyiowuawi and he was charged to Magistrate Court 7, Iyaganku Ibadan.”

Mbu said that they arrested the fraudsters both the staff and non-staff of the university who were involved in the fraud and they have been charged to court. (sunnewsreport)