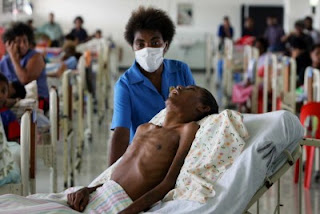 Feb 6, 2018 – Fake Doctor Infects 33 Patients With HIV In India After Using Contaminated Needles To Give Injections

Police in India today filed a complaint against a quack doctor who infected 33 people in northern India with HIV after a quack doctor used contaminated syringes and needles to administer injections.

The police in Uttar Pradesh state’s Unnao district filed a complaint against Rajendra Yadav, who has fled the region in anticipation of arrest, the district’s chief medical officer SP Choudhary told dpa by phone.

Choudhary said the state’s health department had launched an investigation following reports of high number of HIV cases from the Bangarmau region.

The official said 33 of 566 people screened were confirmed HIV positive.

“Locals say the fake doctor who used to treat them for common ailments rarely changed needles and syringes, often using them repeatedly,” Choudhary said by phone from Unnao.

“We suspect that most if not all of the cases here are due to the contaminated syringes and needles being used time and again,” he added.

India has poor standards of medical care due to lack of doctors and hospitals for its burgeoning population.

Millions of poor in towns and villages rely on quack doctors for cheap treatment, with the Indian Medical Association estimating there are one million fake doctors practising in the country in spite of campaigns by health authorities.

Continue Reading
You may also like...
Related Topics:doctor, fake, india