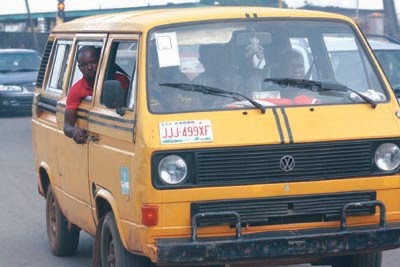 Commissioner for Transportation, Mr. Kayode Opeifa disclosed this at the weekend at a news conference heralding the National Council on Transportation conference which kicked off today and would end on Friday at the Lagos City Hall, Lagos, southwest Nigeria.

According to Opeifa, section 44 of the Road Traffic Law bars commuter bus drivers from driving for eight hours at a stretch, saying that government would begin enforcement of the new law in January 2014.

Opeifa warned that by January next year, government would not have mercy on any bus driver who failed to register, as his vehicle would be impounded for breaching the traffic law.

“With the development, no driver would be allowed to drive beyond 8 hours at a stretch, while owners of the commercial vehicles would be made to get insurance that will cover their passengers. Commercial drivers and their conductors would also begin to appear in registered uniform and badges for proper identification by the public.

“To be regulated also is the number of passengers who stand in the buses particularly, the Bus Rapid Transit, BRT, while no commercial vehicle would be allowed to ply routes not registered for by the government.

“Smoking and eating while driving within the state would attract N20, 000-N30,000 in accordance with the provision of the law for first and second offenders respectively,” Opeifa stated.

According to him, this development is to sustain security and safety already established in the state by the state traffic law, adding that accreditation of the owners of the commuter buses was to ensure that all operators were captured in government’s data base to curtail atrocities and crimes committed with the use of unregistered commercial vehicles.

“With these moves, we want to curtail kidnapping, robberies and other forms of crimes perpetrated by the continuous usage of unregistered vehicles for commercial purposes. We are out to tackle the issue of ‘one chance’ headlong.

“Also, the situation where the drivers and their conductors dress shabbily would be checked with the introduction uniform and badges for them. We are also re-introducing routine system for them. They will only ply only route boldly written on their buses,” he said.

On the 13th National Council on Transportation meeting being hosted by Lagos, Opeifa said the programme was organised to ensure adequate improvement in the transportation system, identify opportunities within the sector and promote various modes of transportation.

The commissioner disclosed that the theme of this year’s conference is: Transformation of Transport Infrastructure: Catalyst for Socio-Economic Growth.

The conference by the council, which comprises all commissioners of transportation in Nigeria, would be chaired by the Minister of Transport, while Governor Babatunde Fashola would be the chief host of the event.

He said the event would be in two sessions-the technical and the National Council meeting, saying that the technical session would be headed by the Federal Permanent Secretary, Ministry of Transportation.

Opeifa said the state government had made adequate preparations to ensure that this year’s meeting was unique as many private organizations were partnering with the government in this regard.