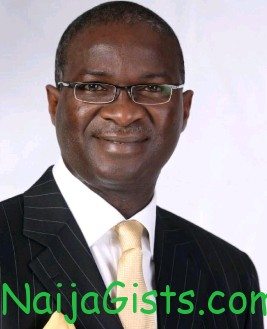 A man identified as Oladuiyi Femi has been arrested in Lagos for allegedly impersonating Governor Fashola, Lagos State Governor to dupe several people seeking approval for Certificate of Occupancy, C of O at the Land Registry. naijagists.com

Oyo State-born Femi, who allegedly paraded himself as a staff of Land Registry, Alausa, Ikeja, Lagos, usually offered to assist those who come there to obtain C of O and ended up duping them by giving them fake papers.

We learnt most of his victims are lawyers who seeks approval for their clients but ended up being duped.

At least 20 lawyers are reportedly to have been defrauded by Femi.

The latest incident that landed him in trouble was when he duped the chambers of a Senior Advocate of Nigeria, SAN, who allegedly paid N2.5 million to him to process a document.

He reportedly gave them documents with forged Fashola’s signature only for the chamber to discover later that the documents were fake.

Femi was arrested at his house at Jakande Estate, Ejigbo, Lagos and detained in a police cell.

He was brought to Ejigbo Magistrate’s court to be arraigned on Monday, but the presiding Magistrate, Mrs. M.B. Folami noted that the alleged offence was committed at Ikeja magisterial district.

She ordered that Femi should be detained at the police station and taken to Ikeja Magistrate’s Court.

Femi confessed at the court that he collected the money but did not dupe lawyers as police claimed.

He said he and other touts usually stay around the Land Registry to assist people including lawyers process their documents to get approval papers from the governor.

When asked whether Governor Fashola gave them (touts) his consent to sign documents on his behalf, he said no but could not explain how he managed to get the governor’s signature.

He also said he is not a staff at the Land Registry.

There was a new twist in the matter yesterday. Instead of the police to take Femi to the court as ordered, he was transferred to a police cell for further investigation. (PM Reports)